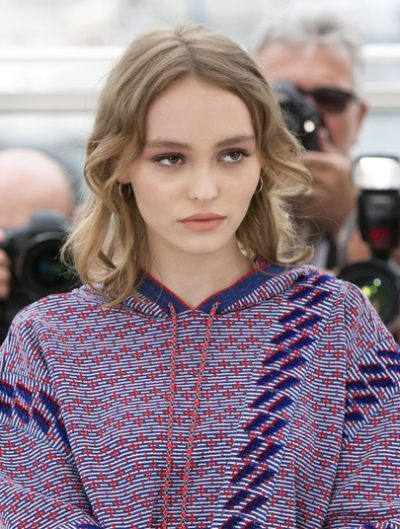 Lily-Rose Depp is a French-American actress and model. She is the daughter of American actor Johnny Depp and French singer and actress Vanessa Paradis. Lily-Rose has dual citzenship with the United States and France. Her father is from Owensboro, Kentucky. Her mother is from Saint-Maur-des-Fossés, Val-de-Marne, France.

Much of more Lily-Rose’s father ancestry traces back to England. He also has smaller amounts (to varying degrees) of Irish, Scots-Irish/Northern Irish, Scottish, Welsh, French, French-Canadian, Dutch, Belgian Flemish, and German ancestry, as well as 3/2048 African ancestry (through Elizabeth Key Grinstead, who is his ancestor twice over). Lily-Rose’s patrilineal line is traced to Pierre Deppe, who was born, c. 1706, in France, and to Pierre’s wife, Angelica/Angeline LeVillian/le Villian.

Lily-Rose’s paternal grandfather is John Christopher Depp, Sr. (the son of Oren Larry Depp and Violet Mattie Grinstead). John was born in Daviess County, Kentucky. Oren was the son of Oren Richard Depp and Effie A. Palmore. Violet was the daughter of Robert Fauntleroy “Roy” Grinstead and Mary E. Bailey.

Lily-Rose is paternally descended from a woman, Martha, who born in 1612, and who was of African descent. Martha had a daughter, Elizabeth Key Grinstead, married to William Grinstead, who were Lily-Rose’s ancestors. Elizabeth’s father, Thomas Key, was caucasian, of English descent. Elizabeth was the first woman of African ancestry to successfully take legal action to free herself from slavery. This happened in 1656. Lily-Rose is descended from Martha twice (on one family tree, she is both one of her nine times great-grandmothers, and one of her ten times great-grandmothers). That would mean that Lily-Rose is of 3/4096 African ancestry.

Some family trees state that Lily-Rose’s nine times paternal great-grandmother was a woman named Nicketti Opechancanough, who is said to have been of Powhatan Native American ancestry. If true, that would make Lily-Rose of 1/4096 Powhatan Native American descent. However, stories about her are believed to be a myth. Scholarly research and records dispute the existence of Nicketti Opechancanough.

Genealogies of Lily-Rose Depp (focusing on her father’s side) – http://worldconnect.rootsweb.ancestry.com
http://www.genealogy.com

Genealogy of Lily-Rose’s paternal great-great-grandfather, Richard Mack/Mac Wells (focusing on his own mother’s side) – http://wc.rootsweb.ancestry.com

Genealogy of Lily-Rose’s paternal great-grandmother, Bessie Whitaker (focusing on her own mother’s side) – http://worldconnect.rootsweb.ancestry.com

Genealogy of Lily-Rose’s mother (focusing on her own father’s side) – https://gw.geneanet.org