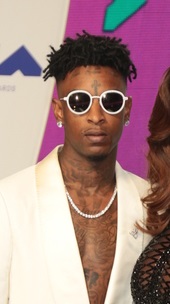 21 Savage is a British-born rapper, songwriter, and record producer.

21 Savage was born in Shéyaa Bin Abraham-Joseph in Newham, London, England, the son of Heather Carmillia (Joseph) and Kevin Cornelius Emmons. His parents are British-born. He is said to be of Dominican (from Dominica) descent on his mother’s side, and Haitian and Saint Vincentian origin on his father’s. He was raised by his mother, who brought him with her to Atlanta, Georgia, when he was seven. His twin sisters are dance choreographers Kyra and Jayda Davis. He is a cousin of rapper and songwriter Young Nudy.

21 Savage grew up in the Ifá religion and divination system, which he practices.

In 2019, he was arrested by U.S. immigration services, which accused him of having been in the U.S. illegally since 2006. He was previously reported as having been born in Atlanta, Georgia, which is incorrect.

21 Savage’s maternal grandmother’s surname is Brumant. The name Brumant is common on Dominica.