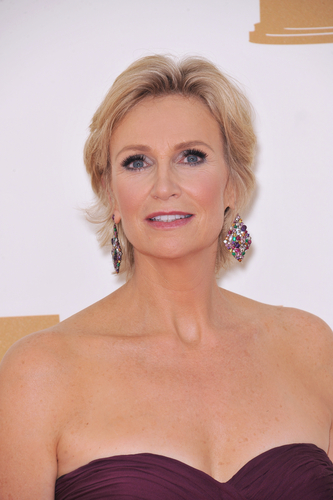 Jane Lynch is an American actress, voice actress, singer, author, and comedian. She is known for her roles in Best in Show, Role Models, Glee, Two and a Half Men, and The Marvelous Mrs. Maisel, among many other works.

Her father, Francis Joseph “Frank” Lynch, was the son of Irish immigrants. Her mother, Eileen (Carney), was of half Irish and half Swedish ancestry.

A DNA test whose results were displayed on the show Finding Your Roots with Henry Louis Gates, Jr. (2021) stated that Jane’s genetic ancestry consists of:

Genetically, she was found to have a common ancestor with actress Mia Farrow.

Jane’s paternal grandmother was named Mary Kathleen Lynsky/Lynskey (the daughter of Michael Lynskey and Margaret). Mary was born in Culduff.

Jane’s maternal grandmother was Helen Nickelson (the daughter of Johan/John August Niklasson/Nickelson and Amanda Ekelund). Helen was born in Illinois, to Swedish parents, her father from Köperöd kronogård, Lane-Ryr, Bohuslän, and her mother from Tyska hemmet u Osby, Skatelöv, Småland. Johan was the son of Niklas Olsson and Johanna Larsdotter. Amanda was the daughter of Sven Magnus/Mafnus Parsson Eklund/Ekelund and Maria Johansdotter Folin.