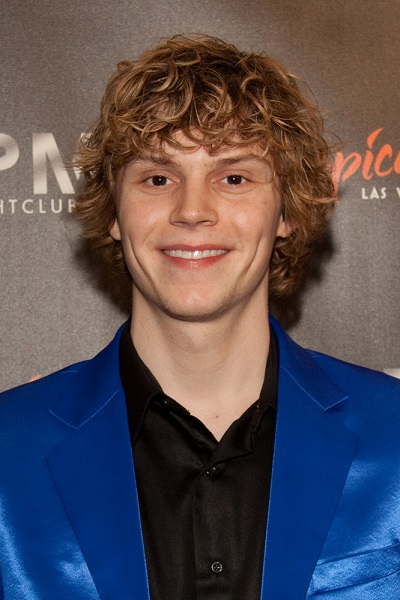 Peters in 2012, photo by Prphotos.com

Evan Peters is an American actor. His roles include the X-Men films, Clipping Adam, Sleepover, Never Back Down, Kick-Ass, Adult World, The Lazarus Effect, American Animals, I Am Woman, and the series Mare of Easttown, Pose, Dahmer – Monster: The Jeffrey Dahmer Story, and American Horror Story.

A picture of Evan with his parents can be seen here.

Evan’s paternal grandfather was Henry Mathew Peters (the son of Henry William Peters and Anna/Annie Mary Duesterhaus). Evan’s grandfather Henry was born in Quincy, Illinois. Evan’s great-grandfather Henry was the son of Johann Heinrich Peters, who was a German emigrant, from Esserden, Nordrhein-Westfalen, and of Anna Mary Catherine Wilde, who was born in Illinois, to German emigrants, from Hanover. Evan’s great-grandmother Anna was also the daughter of German emigrants, Heinrick/Henerick Duesterhaus/Duesterhus, from Ostenland, and Elizabeth Reskenplenk Hollander.

Evan’s maternal grandfather was Thomas Nicholas DeWald, Sr. (the son of Nickolaus/Nicholas DeWald/DeWalt and Katherine “Katie”/”Kate” Becker). Thomas was born in Missouri, to ethnic German parents. Nickolaus was born in Dolaț/Dolacz in Timiș County, Romania, the son of Johann/John/Hans Theobald/Dewald and Katharina/Katherine Krummenacker. Evan’s great-grandmother Katherine was from Sânnicolau Mare/Nagyszentmiklós in Timiș County, Romania, and was the daughter of Johan/John Becker and Juliana/Julia Boehmer.

Evan’s maternal grandmother was Katherine E. Miller (the daughter of Nicholas Miller and Theresa Zornick). Katherine was born in Missouri, to ethnic German parents from Covaci, Romania. Nicholas was the son of Mathias A. Mueller and Catharina Bodjen.