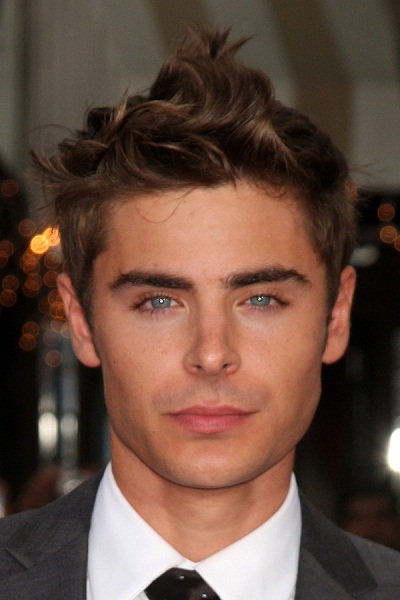 Zac Efron is an American actor, singer, and producer. He is known for his roles in the films High School Musical, Hairspray, Mike and Dave Need Wedding Dates, Extremely Wicked, Shockingly Evil and Vile; Dirty Grandpa, The Lucky One, The Paperboy, and Firestarter, among many others.

He is the son of Starla and David Efron.

Zac’s paternal grandfather is Jewish, the son of Jewish emigrants from Poland. The surname Efron, an Ashkenazi Jewish name, is Hebrew, and is taken from the Biblical place name, עפרוניים. Zac has described himself as Jewish ( “I very much am”), in a skit where he was more or less playing himself (see here).

Zac is an agnostic, and has never been religious.

No genealogical connection between Zac and writer Nora Ephron has been established, but is possible. Nora’s family’s surname was spelled Efron generations back.

Zac’s paternal grandfather is Harold Efron (the son of Nasko/Nossen Rueben Efron and Dworja/Dvora/Dverka Kleszczelska/Klein/Kleiniskyoff). Harold was born in New York, New York, the son of parents, known as Nathan and Dora in the U.S., who were Jewish emigrants, his father from Boćki, Bielsk or Siemiatycze, both in Poland, and his mother from Boćki. Zac’s great-grandparents Nasko and Dworja married in 1927 in Zabłudów, Białystok, Poland. Nasko was the son of Leibel Efron and Gitel “Gutka” Worona. Dworja was the daughter of Nathan Kleszczelska/Klein/Kleiniskyoff, and, likely, Reizel-Feigah/Feiga Webman.

Zac’s maternal grandmother was June Helene Glidden (the daughter of Joseph Henry Glidden and Helene Durgan). June was born in Everett, Snohomish, Washington. Joseph was born in Paw Paw, Van Buren, Michigan, as were Joseph’s own parents, Elmer Ellsworth/Joy Glidden and Luzelle/Luzell/Luella/Luzella Richmond. Elmer had English, Dutch, and Belgian Flemish, ancestry. Elmer’s patrilineal line traces to John Glidden, who was born, c. 1550, in Pancras, near Bideford, Devon, England. Zac’s great-grandmother Helene Durgan was born in Dungeness, Jefferson, Washington, to a father from New York, Edward/Edmund Durgan, and a mother from Michigan, Angie Estelle/Estell Baker. Zac’s great-great-grandfather Edward/Edmund Durgan’s parents were Canadian, and he was of Irish or part Irish ancestry. The surnames Richmond and Baker are often English.

Zac’s great-grandmother Helene (Durgan) Glidden wrote the 1951 novel The Light on the Island, about her childhood growing up on Patos Island, Washington, where her father (Zac’s great-great-grandfather) was lighthouse keeper between 1905 and 1913.

Genealogy of Zac Efron (focusing on his father’s side) – http://genealogy.wikia.com

Genealogy of Zac Efron (focusing on his mother’s side) – http://www.wikitree.com

Genealogy of Zac’s mother (focusing on her mother’s side) – http://www.geni.com

Genealogy of Zac’s maternal great-great-great-grandfather, Joseph Henry Glidden (focusing on his own father’s side) – http://worldconnect.rootsweb.ancestry.com

The Light on the Island, the 1951 novel by Zac’s maternal great-grandmother, Helene (Durgan) Glidden – https://www.amazon.ca