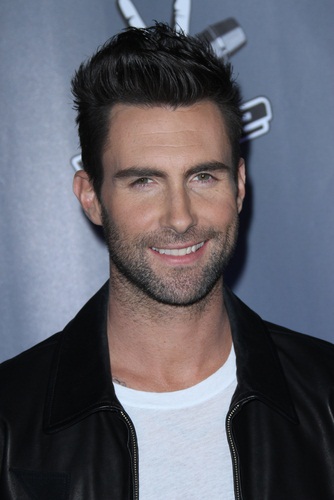 Adam Levine is an American singer, songwriter, musician, record producer, entrepreneur, and actor. He is known for his soulful vocals, and for being the frontman/lead singer of the pop rock band Maroon 5. The band’s other members are Jesse Carmichael, Sam Farrar, Matt Flynn, Mickey Madden, PJ Morton, James Valentine, and, previously, Ryan Dusick.

Adam is the son of Patsy (Noah) and Fredric Jay Levine, who founded the retail chain M. Fredric. His uncles are writer Timothy Noah and writer and director Peter Noah. Adam is married to Namibian-born model Behati Prinsloo, with whom he has two children.

Adam’s father is Jewish. Adam’s maternal grandfather was also Jewish (his family were Jewish emigrants from England and Germany, of Ashkenazi and Sephardi descent). Adam’s maternal grandmother was of German and Scottish (non-Jewish) ancestry. Adam has described himself as Jewish on a number of occasions. He is not religious.

Adam was selected People Magazine’s “Sexiest Man Alive” in 2013. He is the second man of Jewish heritage to have been given this title by the magazine (Harrison Ford, in 1998, is the first, David Beckham, in 2015, is the third, and Paul Rudd, in 2021, is the fourth).

Adam’s maternal grandfather was Robert Mortimer Noah (the son of Mortimer Noah and Rose Margaret Isselbacher). Robert was born in New York. Adam’s great-grandfather Mortimer was the son of Samuel M. Noah and Rose/Rosa Barnett. All four of Mortimer’s grandparents, Morris Noah, Amelia Rodrigues Brandon, Benjamin Barnett, and Rebecca Simmons, were Jewish emigrants from England. Their ancestry included Sephardi Jewish and Ashkenazi Jewish lines, with Dutch Jewish roots. Adam’s great-grandmother Rose Isselbacher was the daughter of Charles Isselbacher, who was born in New York, to German Jewish parents, and of Esther Ehrenreich, who was a German Jewish immigrant.

Adam’s maternal grandmother is Marian Jane Swentor (the daughter of George William Swentor and Jean Robertson). Marian was born in New York, and was from a Christian background. George was the son of German immigrants, August Wilhelm/William Swentor (originally spelled Schwentorous or Schwentorus) and Amelia Schmidt/Smith. Jean was born in Inverness, Scotland, the daughter of Donald Robertson and Jane P. Drew.

Sources: Interview with Adam Levine at The Jewish Chronicle, 2011 – http://www.thejc.com