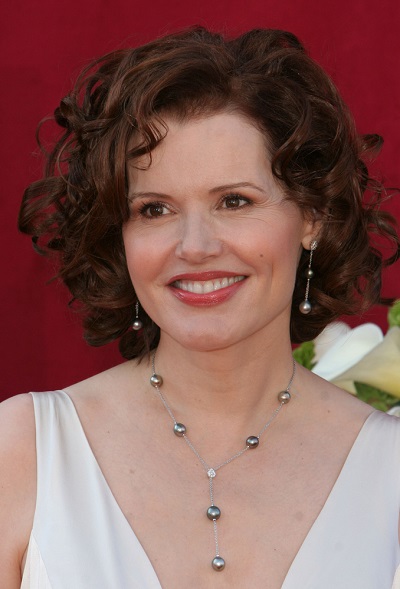 Ethnicity: English, around one eighth Irish, some distant Scottish and Welsh

Geena Davis is an American actress, advocate, fashion model, writer, film producer, and archer. She won the Academy Award for Best Supporting Actress for The Accidental Tourist (1988). Her roles also include the films Tootsie, The Fly, Beetlejuice, Earth Girls Are Easy, Thelma & Louise, A League of Their Own, Cutthroat Island, The Long Kiss Goodnight, and Stuart Little, and the shows Commander in Chief, Grey’s Anatomy, and The Exorcist.

Geena is the daughter of Lucille Martha (Cook) and William Frank Davis. She has three children with her former partner, Iranian-American plastic surgeon Reza Jarrahy. Geena is 6′.

She is of English descent, as well as one eighth Irish, and also has some fairly distant Scottish and Welsh roots. Most of her family lines have resided in the United States, specifically in New England, since the 1600s. She is a descendant of Myles Standish, the Plymouth Colony’s military adviser. Geena was an organist at a Congregational church, where her father was a Deacon.

It appears that Geena has no American-born ancestors who were born outside of New England.

Geena’s patrilineal line can be traced to Dolor/Dolour Davis, who was born, c. 1599, and lived in East Fairleigh, Kent, England.

Genealogy of Geena’s paternal grandmother, Edna Frances Green/Greene (focusing on her own mother’s side) – https://www.geni.com