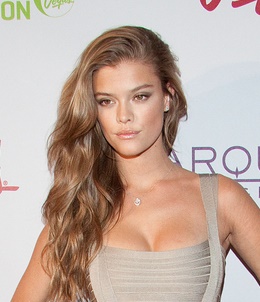 Nina Agdal is a Danish model. She is 5 feet 9 inches tall and has light brown hair and green/hazel eyes.

Nina is the daughter of Anne-Mette Agdal and a father surnamed Brohus Jakobsen.

Nina’s maternal grandfather was Jørgen Nielsen (later Agdal, the son of an unknown father and Herdis Ketty Nielsen). Jørgen was born in Ringkøbing. Herdis was the daughter of Niels Peder Nielsen and Anna Jakobsen.

Nina’s maternal grandmother is Lona Agdal (the daughter of Tage Andersen, later Agdal, and of Astrid Dorthea Frederikke Bruun). Lona was born in Frederiksberg. Tage was the son of Niels Andersen (later Agdal) and Mariane Pedersen. Astrid was the daughter of Johannes Ludvig Carl Georg Bruun, who was of part Norwegian descent, and of Ane Kristine Pedersen.

Source: Genealogy of Nina Agdal (focusing on her mother’s side) – https://www.myheritage.com