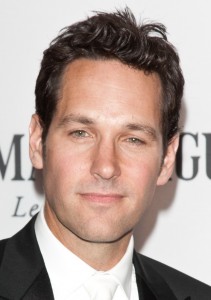 Paul Rudd is an American actor, screenwriter, and producer. Among his many roles are Wet Hot American Summer, Clueless, Role Models, Dinner for Schmucks, This Is 40, Halloween: The Curse of Michael Myers, and Scott Lang / Ant-Man in the Marvel Cinematic Universe.

Paul’s parents, Gloria Irene (Granville) and Michael Rudd, both Jewish, were born in England, his father being from Edgware and his mother from Surbiton. Paul had a Bar Mitzvah ceremony. His ancestors were Jewish emigrants from Eastern Europe (Poland, Belarus, and Russia) to England. A picture of Paul’s parents can be seen here. Paul was raised partly in Lenexa, Kansas. He is married to publicist and writer Julie Yaeger, with whom he has two children.

My whole family is Jewish; my wife, Julie, is Jewish – there isn’t anyone in my family who isn’t Jewish. I was bar mitzvahed Reform; we were pretty laid back, but it’s like, oh yeah, I went to synagogue. I know what it’s like to look for matzoh [laughs]. I know the culture and I know the food. I know what a Haggadah is!… We have a lineage that is so many thousands of years old, that you just relate. It is a tribe; it’s like, “Oh, yeah, that’s my team,” and I feel that for sure.

Paul was selected People Magazine’s “Sexiest Man Alive” in 2021. He is the fourth man of Jewish heritage to have been given this title by the magazine (Harrison Ford, in 1998, is the first, Adam Levine, in 2013, is the second, and David Beckham, in 2015, is the third).

Paul’s paternal grandfather was David Rudd (born Davis Rudnitsky, the son of Shmuel/Samuel Ar’ye Nehemov/Nokhimov Rudnitsky/Rudnjtsky and Esther/Ester Schustan). Paul’s grandfather Davis was born in St George in the East, London, England, to Jewish parents from Kholmich, Belarus. Shmuel was the son of Nokhim/Nechemiah/Nehemov Rudnitsky and Sura. Esther was the daughter of Itzhak/Yitzhak Schustan and Dveira/Dvora.

Paul’s maternal grandfather was Louis Granville (born Louis Goldsztejn/Goldstein, the son of Kopel/Charles Goldsztejn/Goldstein and Miriam/Mariam “Millie”/”Minnie” Schneiderman). Paul’s grandfather Louis was born in Mile End Old Town, London, England, to Polish Jewish parents. Kopel was from Wolbrom, Kraków. Mariam was from Łódź, and was the daughter of Label Schneiderman.