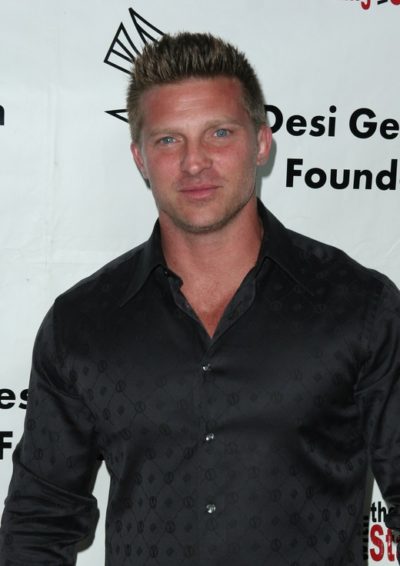 Steve Burton is an American actor.

Steve is the son of Ronni and Jack Burton. He was raised in Ohio and California, and celebrated both Christian and Jewish holidays. Steve is married to Sheree Gustin, with whom he has three children.

His mother was adopted by a Jewish couple. At the time of his mother’s birth, most children adopted by Jewish families were born to a Jewish mother (and sometimes also to a Jewish father).

Steve’s paternal grandfather was Jack Alden Burton (the son of Jasper Burton and Bertha Bell Wall). Jack was born in Kentucky. Jasper was the son of Ellsworth W. Burton and Nancy Ellen Walters. Bertha was the daughter of Morris Green Wall and Maude Ellen Blankenship.

Steve’s paternal grandmother was Catherine Bledsoe (the daughter of Henry S. Bledsoe and Stella Mary Hickman). Catherine was born in Indiana. Stella was the daughter of John William Hickman and Mary Ann Brown.

Steve’s adoptive maternal grandfather was Paul M. Hausman (the son of Louis Hausman and Sarah/Sara Mintz). Paul was born in Ohio. Louis was born in Poland. Sarah was born in Russia, the daughter of Pincus Mintz and Minnie Lichtenberg.

Steve’s adoptive maternal grandmother was Sylvia May Levine (the daughter of Louis Levine and Rebecca Brodsky). Sylvia was born in Ohio, to parents from Russia.