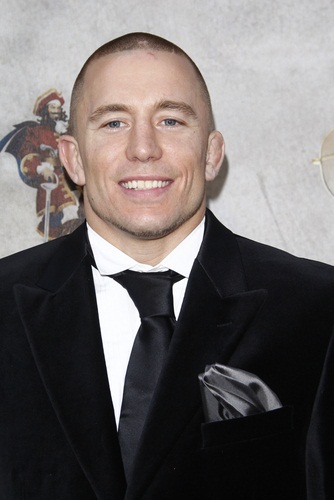 Georges St-Pierre is a Canadian mixed martial artist, UFC welterweight champion, and actor. He is the son of Roland and Pauline St-Pierre. He speaks English and some Portuguese, as well as French.

Georges’s paternal grandfather was Georges St-Pierre (the son of Ludovic St-Pierre and Aldea Dessaint/Dessein). Ludovic was the son of Joseph St-Pierre and Mathilde Bazinet. Aldea was the daughter of Arthur Dessaint and Exilda Petit.

Georges’s maternal grandmother was Simone Leduc (the daughter of Albert Leduc and Rebecca Guyon). Simone was born in Saint-Constant, Montérégie, Québec. Albert was the son of Joseph-Emery Leduc and Blandine Longtin. Rebecca was the daughter of Joseph Guyon and Hermine Hotte.

Georges’s matrilineal line can be traced to Jeffine Riviere, who was born, c. 1611, in Rouen, France.

Genealogy of Georges St-Pierre (focusing on his father’s side) – https://www.geni.com