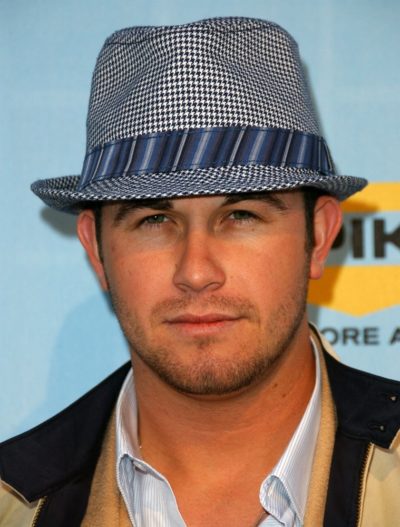 Longoria in 2008, photo by Prphotos

Evan is the son of Mary Ellen and Michael Longoria. He is married to model Jaime Edmondson, who was a Playmate of the Month in 2010. The couple has two children.

He has said that he is not related to actress and activist Eva Longoria.

Evan’s paternal grandmother was Irene Flora Osterhoudt (the daughter of Charles Robt Osterhoudt and Sylvia G. Booth). Irene was born in Massachusetts. Charles was the son of Frank Osterhoudt and Ethel Johnson. Sylvia was Canadian.

Evan’s maternal grandfather was John Edward Kristoff (the son of John Edward Kristoff/Kristofsky and Mary Zirney). Evan’s grandfather John was born in Pennsylvania. Evan’s great-grandfather John likely was the son of Andrew Kristofsky and Anna Jarko/Jurko, who were Slovak immigrants. Mary was born in Carnegie, Pennsylvania, the daughter of John Zirney and Julia Bosko, who were from Austria, and who possibly were also of Slovak descent.

Evan’s maternal grandmother was Dorothy Uram (the daughter of Harry K. Uram and Anna Turek). Dorothy was born in Pennsylvania, to Ukrainian parents.