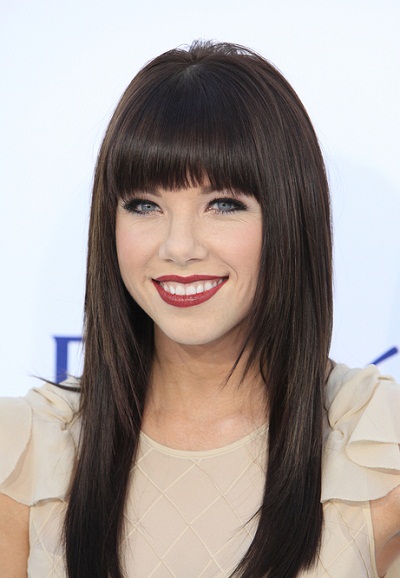 Jepsen in 2012, photo by Joe Seer/Bigstock.com

Carly Rae Jepsen is a Canadian singer, songwriter, and actress. She is known for her songs “Call Me Maybe,” “This Kiss,” and “I Really Like You,” among others.

Carly Rae’s paternal grandfather is Arnie Jepsen (the son of Axel Jepsen and Lydia Elvera/Elvira Christensen). Arnie’s parents were Danish. Axel was born in Arhus, the son of Hans Jepsen and Karen Sørine Møller. Lydia was the daughter of Christian Christensen and Mette Nielsen.

Carly Rae’s paternal grandmother is Evelyn Allen (the daughter of Kenneth/Ken H. Allen and Rose Dziadyk). Kenneth was an immigrant, and was the son of English parents, Henry Sinden Allen and Amy Bradley. Rose was the daughter of emigrant parents, Theodore Fred Dziadyk and Annie Rusmavich, from Galicia.

Carly Rae’s maternal grandmother was Edith Ann Cameron (the daughter of James D. Cameron and Edith Laura Vandergrift). Carly Rae’s grandmother Edith was born in Philadelphia, Pennsylvania, U.S. James was the son of James B. Cameron, whose parents were Scottish, and of Mary Broomhead, whose father was English and whose mother was German. Carly Rae’s great-grandmother Edith was the daughter of Francis Riley “Frank” Vandegrift, who had partly deep roots in the U.S., and of Minnie W. Gruninger, whose own paternal grandparents were German, and whose mother was likely also of German descent.