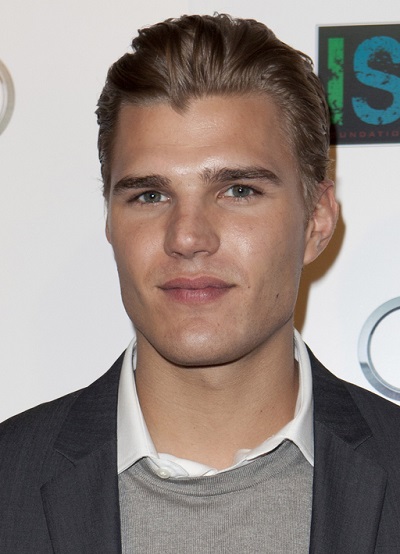 Chris Zylka is an American actor. His roles include the films The Amazing Spider-Man, My Super Psycho Sweet 16, Shark Night 3D, Piranha 3DD, Novitiate, and The Death & Life of John F. Donovan, and the shows Zeke and Luther, The Secret Circle, and The Leftovers.

Born Chris Settlemire, he later took Zylka, his mother’s maiden name, as his stage name. Zylka is a Polish surname.

Chris’s father has German, as well as smaller amounts (to varying degrees) of English, Irish, Scottish, and Welsh, ancestry. Chris’s mother is of Polish, Ukrainian, Slovak, and Ruthenian/Rusyn descent.

Chris’s paternal grandfather was Ralph Duane Settlemire (the son of Martin Settlemire and Eva G. Kornprobst). Ralph was born in Pennsylvania. Martin was the son of Isaac Perry Settlemire and Arvilla “Anna” Rager. Eva was the daughter of Harry Milton Kornprobst and Emma L. Stout/Stoup.

Chris’s maternal grandfather is William Zylka (the son of Metrophan/Mitrofan/Michael Zylka and Anastasia Esther Kozarewski/Kozorewski). Metrophan and Anastasia were both emigrants, of Polish and Ukrainian origin. Metrophan was the son of Makar Zilka and Aleksandra Slewsarweski, who was from Novyi Oleksynets, Ternopil oblast, Ukraine. Anastasia was the daughter of Dimitro Kozarewski and Feodora Antonuk.

Chris’s maternal grandmother is Patricia Elaine Rosko (the daughter of Michael Rosko, Jr. and Margaret A. Zimomra). Michael was born in Pennsylvania, and likely was of Slovak descent. Margaret was also born in Pennsylvania, the daughter of Michael “Mike” Zimomra and Ilona/Helena/Helen Busmaj Csukalovcsak/Cukalovcak, who was from Homonnarokitó (Rokytov pri Humennom, Slovakia), and was of Ruthenian/Rusyn ancestry.

Genealogy of Chris’s paternal grandfather, Ralph Duane Settlemire (focusing on his own father’s side) – http://wc.rootsweb.ancestry.com