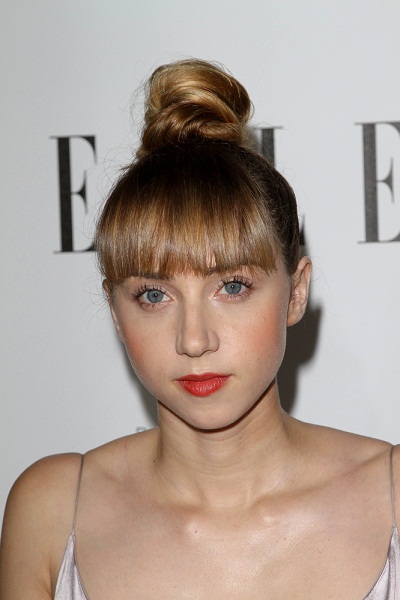 Kazan in 2012, image via Prphotos.com

Zoe Kazan is an American actress, screenwriter, and playwright. Her roles include Me & Orson Welles, It’s Complicated, Happythankyoumoreplease, Meek’s Cutoff, Ruby Sparks, Olive Kitteridge, In Your Eyes, The Big Sick, The Ballad of Buster Scruggs, The Plot Against America, Clickbait, and She Said.

She is the daughter of screenwriters/filmmakers Nicholas Kazan and Robin Swicord (Robin Stender Swicord). Zoe’s grandfather was director Elia Kazan. Her sister is actress Maya Kazan. Her paternal grandfather was of Greek descent, and her other ancestry is English and German.

Zoe has a daughter with her partner, actor and director Paul Dano.

Zoe’s paternal grandmother was Mary Day “Molly” Thacher (the daughter of Alfred Beaumont Thacher and Emma Cecelia Erkenbrecher/Erkenbrecker). Mary was born in New Jersey, and was of English and German descent, with many prominent ancestors. Alfred was the son of Thomas Anthony Thacher and Olivia Elizabeth Day. Emma was the daughter of Cornelius Miles Ekrenbrecher/Erchenbrechber and Mary Beck.

Genealogy of Zoe’s paternal grandmother, Mary Day “Molly” Thacher (focusing on her own father’s side) – http://worldconnect.rootsweb.ancestry.com

Genealogy of Zoe’s mother (focusing on her own father’s side) – http://freepages.genealogy.rootsweb.ancestry.com