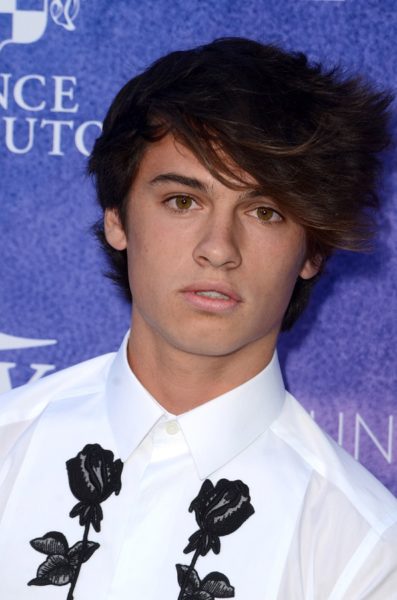 Lee in 2016, photo by kathclick/Bigstock.com

Dylan’s paternal grandfather was David Oliver Bass (the son of John Samuel Bass and Julia E. Sanders). David was American, and was born in Minnesota. He had English, and some Irish and French, ancestry. John was the son of Josiah J. Bass and Alice E. Oliver. Julia was the daughter of Henry A. Sanders, who was of French and Irish descent, and of May E. Patrick.

Dylan’s maternal grandfather is Barry Anderson (the son of Herman Anderson and Marjorie Sherwin/Sherwood). Herman was born in Finland, and had family from Saarijärvi; he was the son of Juho Herman Hyytiänen/Hyytiäinen/Anderson and Rachel Evelyn Keski-Salmi/Solmie. The surnames Sherwin or Sherwood are usually English.

Dylan’s maternal grandmother was is Carol Cawthorpe (the daughter of William Thomas “Bill” Cawthorpe and Rosie/Rose Friesen). William was born in Saskatchewan, and was the son of James Linden Thomas Cawthorpe and Mary Adaline Smith. He had English, German, Scottish, and Northern Irish/Irish ancestry. Rosie was born in Silberfeld Village, Manitoba, Canada, and was of ethnic German descent, from a family that lived in Russia. Her family were Mennonites, from Chortitza, a Mennonite colony. She was the daughter of Cornelius Peter Friesen and Anna Schulz/Schultz, who was born in Rosenbach, Chortitza, the daughter of Jacob Benjamin Schulz/Schultz and Katarina Dyck.

Dylan’s father is descended from John Bass, who was born in Suffolk, Virginia. John was the son of William Basse and Catherine/Katherine Lanier/Lanyere. William was the son of John Basse, an English immigrant, and of Elizabeth Nansemond, who was Native American, and a princess of the Nansemond tribe. Catherine’s ancestry is disputed. Some sources state that she too was a Nansemond Native American, while others say that she was born to English immigrants. While some genealogies list her as the daughter of John Lanier and Lucreece Bassano, this is not the case, as their only daughter, Katherine, died as an infant.

Genealogy of Dylan’s mother (focusing on her father’s side) – http://worldconnect.rootsweb.ancestry.com