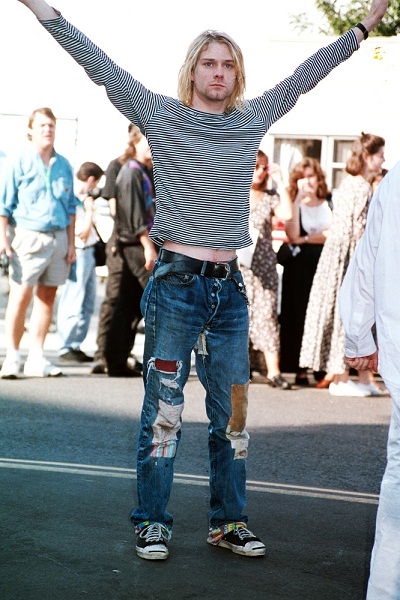 Kurt Cobain was an American songwriter and musician. He was the lead singer, guitarist, and primary songwriter of the rock band Nirvana. Other members of Nirvana were Dave Grohl and Krist Novoselic, as well as Aaron Burckhard and Jason Everman.

Kurt was the son of Wendy Elizabeth (Fradenberg) and Donald Leland Cobain. With his wife, musician Courtney Love, Kurt was the father of visual artist Frances Bean Cobain.

Kurt’s patrilineal ancestry can be traced to his great-great-great-grandfather, John James Cobain, who was born in Ireland, c. 1863.

Kurt’s paternal grandfather was Leland Elmer Cobain (the son of John James Arthur Cobain and Grace Almeda Gibson). Leland was born in Washington. John was the son of John James Cobain, who was born, c. 1863, in Tyrone, Northern Ireland, and of Anna Minerva van Alstyne/van Alstine. Grace was the daughter of Jasper/Jaspar Gibson and Mary Ann Ford, whose own mother, Mary Elizabeth Moore, was born in Iowa, to Irish parents.

Kurt’s maternal grandfather was Charles Thomas Fradenburg (the son of Charles Lester Fradenburg and Elizabeth Mary Ultican). Kurt’s grandfather Charles was born in Washington. Kurt’s great-grandfather Charles was the son of William Henry Fredenburgh and Irene Diamond. Elizabeth was the daughter of James Ultican, who was from New Brunswick, Canada, to Irish parents, and of Bridgett/Bridget Elizabeth Sullivan, whose own parents, John Daniel Sullivan and Catherine Harrington, were also Irish, from County Cork.

Kurt’s maternal grandmother was Margaret Dawson Irving (the daughter of James William Irving and Ada Elizabeth Dawson). Margaret was born in Washington. James was born in Scotland. Ada was born in Kent, England.

Genealogies of Kurt Cobain (focusing on his father’s side) – http://www.wikitree.com
http://wc.rootsweb.ancestry.com