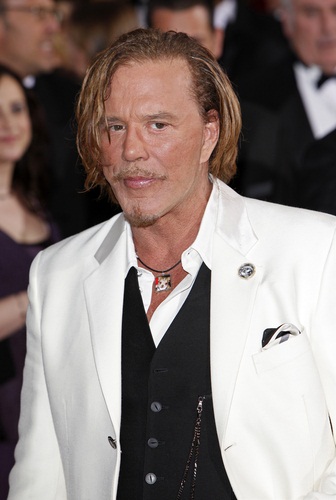 Mickey Rourke is an American Golden Globe Award-winning actor, as well as a screenwriter and boxer.

Mickey is the son of Annette and Philip Andre Rourke, Sr. He was a professional boxer in his early years and had eight undefeated fights. He grew up Miami, Florida, with his mother and stepfather.

Mickey’s paternal grandmother was Mary A./Suzan “May” Andre (the daughter of Jacob Andre and Gertrude Harlfinger). Mickey’s grandmother Mary was born in New York, to German parents. Gertrude was born in Friedrichshain-Kreuzberg, Berlin, and was the daughter of Friedrich/Frederick Josef/Joseph Harlfinger and Anna Maria/Almira Muth, who were from Zell, Rhineland-Palatinate.

Mickey’s maternal grandfather was Leonard Ernest Cameron (the son of George Louis Cameron, Jr. and Elizabeth Helen Lovern/LeVigne/Lavarne). Leonard was born in Vermont. George was the son of George Arthur Cameron, who was of French-Canadian and German descent, with the family surname having originally been Cameraire; and of Marie/Mary A. Robillard, who was French-Canadian, from Québec. Mickey’s great-grandmother Elizabeth was the daughter of Canadian-born parents, Peter Lovern and Marie Julienne/Julia Ann Dupre, and also had French-Canadian ancestry.

Mickey’s maternal grandmother was Hazel May Carleton (the daughter of Joseph Clinton Carleton and Alice Maud/Maude Fitts/Fitz). Hazel was born in Vermont. Joseph was the son of Hiram Wilson Carleton and Charlotte Maria Fellows. Alice was the daughter of Joshua George Fitts and Victoria Nancy/Mary Avery. Victoria was a descendant of colonial landowner, legislator, and military commander James Avery.

Genealogy of Mickey’s maternal grandfather, Leonard Ernest Cameron (focusing on his own mother’s side) – http://worldconnect.rootsweb.ancestry.com