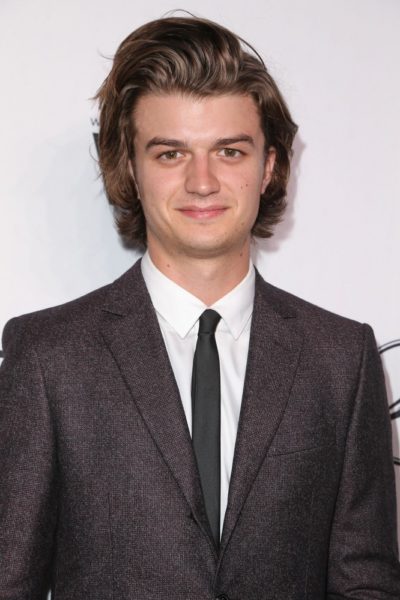 Joe Keery is an American actor and musician. He is known for his role as Steve on the show Stranger Things, and for the films Spree and Free Guy.

He has roots in Massachusetts, Connecticut, Maine, and Virginia going back to the 1600s.

Joe’s patrilineal line traces to Abram/Abraham Keery, who was born, c. 1838, and to his wife, Sarah J. Wright. They were born in Belfast, Ireland.

Joe’s paternal grandfather was Thomas David Keery (the son of Thomas Russell Keery and Bronwen Forte Edwards). Joe’s grandfather Thomas was born in Boston, Suffolk, Massachusetts. Joe’s great-grandfather Thomas was born in Hancock, Delaware, New York, the son of Thomas S. Keery and Nettie A. Tuper, whose father was of French-Canadian descent. Joe’s great-grandmother Bronwen was born in Clyde, Wayne, New York, the daughter of David/Dafydd Lincoln Edwards, whose parents were Welsh, and of Eileen Muguette/Muguett Forte, whose mother was of Colonial American (English) descent.

Joe’s paternal grandmother was Constance M. FitzGerald (the daughter of Arthur Grover Fitzgerald and Evelyn Stewart/Stuart Martin). Constance was born in Newton, Middlesex, Massachusetts. Arthur was the son of Robert Francis Fitzgerald and Jane E. Curran, and was of Irish origin. Joe’s great-grandmother Evelyn was the daughter of Walter J. Martin and Jane/Jennie MacEachan, who were the children of Canadian parents, from Nova Scotia.

Joe’s maternal grandfather is Robert McClellean/McClellen/McClellan Barger (the son of Henry Thornton Barger and Louise Williams Dunn). Robert was born in Bland, Bland Co., Virginia, and has deep roots in the state. Henry was the son of Charles Robert Barger and Martha Jane/L. Lindamood. Louise was the daughter of Charles McClellan/McClellen Dunn and Lena Lockard Thompson.

Joe’s maternal grandmother is Susan Rae Haney (the daughter of John Thomas Haney and Virginia Mae Holmes). Susan was born in Washington, D.C. John was born in Atlanta, Georgia, the son of Paul Haney and Anna Lucretia Morse, who was born in Connecticut, of Colonial American (English) descent. Virginia was the daughter of Ray Vincent Holmes and Elsie Mildred Draham.