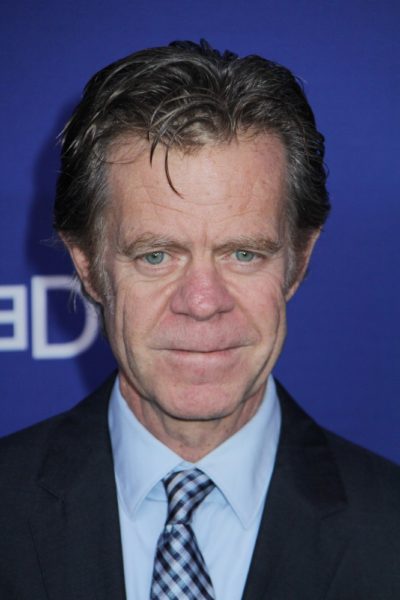 William H. Macy is an American actor, teacher, writer, and director. His roles include Fargo, Air Force One, Pleasantville, Magnolia, The Cooler, Wild Hogs, and Boogie Nights, among many other films, and the show Shameless.

He is the son of Lois Elizabeth (Overstreet) and William Hall Macy, a WWII veteran who received the Distinguished Flying Cross and an Air Medal for piloting a B-17 Flying Fortress bomber. His mother was widowed when her first husband died in WWII. William was raised in Georgia and Cumberland, Maryland. He is married to actress Felicity Huffman, with whom he has two children. William often talks about his Lutheran faith.

William’s patrilineal line can be traced to Thomas Macy, who was born, c. 1605/1608, in England. Thomas was among the early European owners and settlers of Nantucket, Massachusetts.

William’s paternal grandfather was Albert Hall Macy (the son of William Henry Macy and Emily de la Montagnie/Montagne). Albert was born in Goshen, Orange, New York. William’s great-grandfather William was the son of John I. Macy and Jane Hall, who was born in Little Broughton, Cumberland, England. Emily was the daughter of William de la Montagnie, Jr. and Cornelia McMullen, whose father was born in Ireland. Through his Macy line, William is a distant cousin of Rowland Hussey Macy, who founded R. H. Macy & Co. (now Macy’s), and of actor Ethan Hawke.

William’s paternal grandmother was Elizabeth Cowan Somerville/Sommerville (the daughter of John Somerville and Clementine Cowan McLeyne). Elizabeth was born in Barton, Allegany, Maryland. John was Scottish, from Cambusnethan, Lanark, and was the son of John Somerville/Sommerville and Agnes Russell. Clementine had Scottish and Irish ancestry, and was the daughter of John McLeyne, who was born in Ireland, and of Katharine Cowan.

William’s maternal grandfather was Clement Overstreet (the son of Ellis G. Overstreet and Isabella/Isabelle Quave). Clement was born in Moss Point, Jackson, Mississippi. Ellis was the son of Jacob H. “Jake” Overstreet and Sarah Elizabeth Loper. Isabella was the daughter of Ursant/Usant Quave, whose father was a slaveowner, and whose own grandfather was from Seville, Andalusia, Spain, originally surnamed De Cuevas; and of Sarah Davis.

A DNA test on the show Finding Your Roots with Henry Louis Gates, Jr. (2017) found that William has a common ancestor with actress Mary Steenburgen.

Genealogy of William H. Macy (focusing on his father’s side) – http://worldconnect.rootsweb.ancestry.com

Genealogy of William’s paternal great-great-grandmother, Cornelia McMullen (focusing on her mother’s side) – http://worldconnect.rootsweb.ancestry.com

Genealogy of William H. Macy (focusing on his mother’s side) – https://wmstrother.org