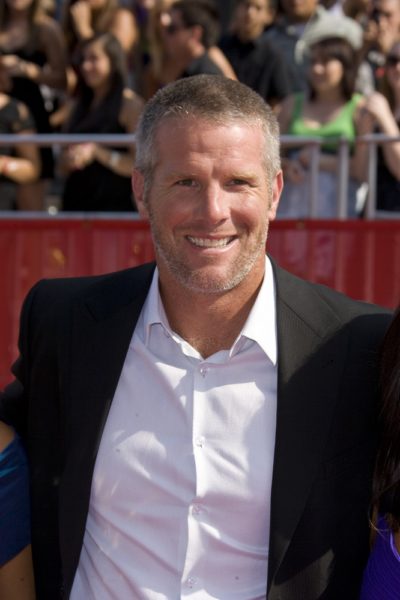 Brett Favre is an American professional football player. He played in the National Football League (NFL), spending most of his career with the Green Bay Packers.

Brett is the son of Bonita and Irvin Ernest Favre. He is of Cajun French, some Swiss-German and Spanish, a smaller amount of Choctaw Native American, distant German and English, and remote Belgian, descent. Brett is married to Deanna Favre, with whom he has two children. Deanna is an advocate for beast cancer research, having founded the Deanna Favre Hope Foundation.

Brett’s paternal grandfather was Alvin Ernest Favre (the son of Ernest Anatole Favre and Winona Favre, both of whom were born with the surname Favre). Alvin was born in Mississippi. Brett’s great-grandfather Ernest was the son of Anatole Charles Favre and Marie Eugenie/Eugenia Lizana. Winona was the daughter of Joel Joseph Favre and Celia/Celina Thomas, or of Joseph Pedro Favre and Arsene Angela Johnston.

Brett’s maternal grandmother was Izella Garriga (the daughter of Ernest Garriga and C. Marie Gabrielle/Gabriel Hode/Hoda). Izella was born in Mississippi. Ernest was the son of Raymond Garriga and Theresa/Therese Malley. C. Marie Gabrielle was the daughter of Firmin Marie Hode and Lucina Cuevas. Ernest’s paternal grandfather, Ramon/Raymond Garriga, was Spanish, from Barcelona, and Brett has other Spanish roots on his family tree.

Brett’s matrilineal line can be traced back to Celeste Favre, who was born, c. 1818, in Hancock, Mississippi.

Genealogy of Brett Favre (focusing on his father’s side) – http://worldconnect.rootsweb.ancestry.com