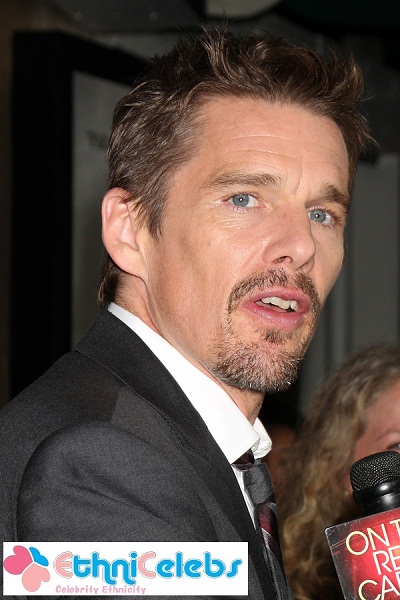 Hawke in 2012, image via kathclick/Bigstock.com

Ethan Hawke is an American actor, writer, and director.

Ethan is the son of Leslie Carole (Green) and James Steven Hawke. Ethan has is married to Ryan Shawhughes. He has two children, actors Maya Hawke and Levon Hawke, with his former wife, actress and model Uma Thurman; and two children with Ryan.

Ethan’s paternal grandfather was Frank Taylor Hawke (the son of Ronald M. Hawke and Edith S. Mosher). Frank was born in Warren County, Ohio. Ronald was the son of George Washington Hawke, whose parents were from England, with his father having been born in Truro, Cornwall; and of Ida Jane Dakin. Edith was the daughter of John Jacob Mosher and Laura Henrietta Harris.

Ethan’s maternal grandfather was Howard Lemuel Green (the son of Thomas Lemuel Green and Della Hall). Howard was born in Swenson, Stonewall, Texas, to parents from Alabama. He was a minor-league baseball commissioner and served five terms in the Texas Legislature. Thomas was the son of John Anderson Green and Mary J. Nelson. Susie was the daughter of John Hall and Nancy Annie Reed.

Genealogy of Ethan Hawke (focusing on his father’s side) – http://humphrysfamilytree.com

Genealogies of Ethan Hawke (focusing on his mother’s side) – http://familypedia.wikia.com
http://www.wikitree.com