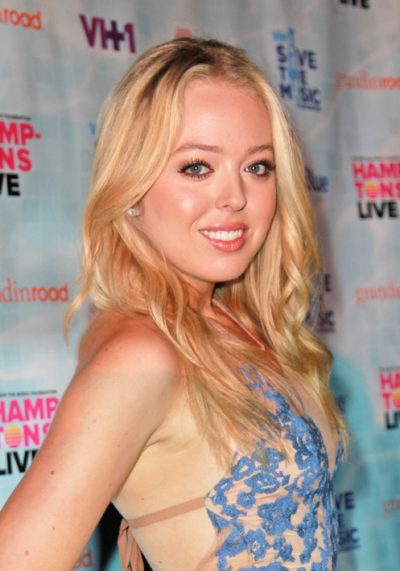 Tiffany Trump is an American socialite and model.

She is the daughter of Marla Maples, an actress, and Donald Trump, a businessperson and television personality, who was the 45th President of the United States.

While it is sometimes stated that Tiffany’s great-grandfather was born under the surname Drumpf, this is not accurate. The family surname was simply Trump going back at least several generations.

Tiffany’s patrilineal line traces to Johann Paul Trump, who was born, c. 1727, and was from Bobenheim am Berg.

Tiffany’s paternal grandfather was Frederick Christ Trump (the son of Frederick/Friedrich/Friederich Trump and Elizabeth/Elisabeth Christ). Tiffany’s grandfather Frederick was born in Woodhaven, Queens, New York, to German parents, from Kallstadt, Rhineland-Palatinate. Tiffany’s great-grandfather Friedrich was the son of Johannes Trump and Katharina/Katerina/Katherina Kober, who was born in Augsburg, Bavaria. Elizabeth was the daughter of Philipp Christ and Anna Maria/Marie Anthon.

Tiffany’s paternal grandmother was Mary Anne MacLeod (the daughter of Malcolm/Calum MacLeod and Mary Smith). Tiffany’s grandmother Mary Anne was Scottish, born in Tong, Stornoway, on the Isle of Lewis. She came to the U.S. around 1929, at the age of seventeen, and worked as a maid in New York. She became a U.S. citizen in 1942. Malcolm was the son of Alexander MacLeod and Ann/Anne/Annie MacLeod. Tiffany’s great-grandmother Mary was the daughter of Donald Smith and Mary Macaulay/Macauley.

The Locklear family of the American South is said to have a Lumbee Native American origin. It is not clear how distant Tiffany’s Lumbee ancestry may be. Actress Heather Locklear is descended from the same ancestors, and is Tiffany’s half-fourth cousin, once removed, through their common forebear William Jesse Locklear.

Genealogy of Tiffany’s father (focusing on his father’s side) – http://www.wargs.com

Information about some of Tiffany’s Scottish ancestors – http://www.scotlandspeople.gov.uk

Genealogy of Tiffany Trump (focusing on her mother’s side) – http://wc.rootsweb.ancestry.com

Genealogy of Tiffany’s mother (focusing on her own father’s side) – http://wc.rootsweb.ancestry.com