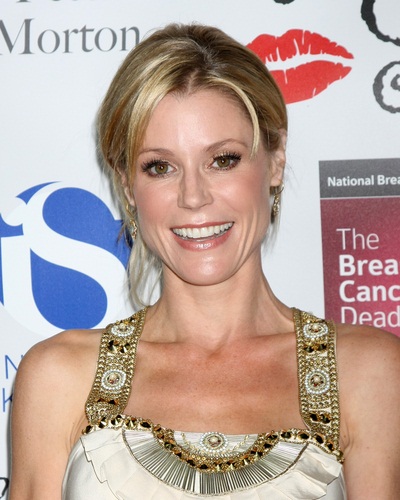 Julie Bowen is an American actress and model. Her roles include Modern Family, Happy Gilmore, An American Werewolf in Paris, and Hubie Halloween.

Julie is the daughter of Suzanne and John Alexander Luetkemeyer, Jr., a commercial real estate developer. She has deep roots in Maryland and Pennsylvania, with many prominent ancestors. Julie has three children with her former husband, real estate and software developer Scott Phillips.

Julie’s paternal grandmother was Anne Austin McLanahan (the daughter of Austin McLanahan and Romaine Lemoyne). Anne was born in Baltimore, Maryland. Julie’s great-grandfather Austin was the son of Thomas Johnston McLanahan, who had Scots-Irish/Northern Irish ancestry, and of Rebekah A. Austin. Julie’s great-grandmother Romaine’s father, John V. Le Moyne (John Valcoulon LeMoyne), was a Democratic Party politician, who was a Member of the U.S. House of Representatives from Illinois, from May 6, 1876 to March 3, 1877; his own father, Francis Julius LeMoyne, was a medical doctor and philanthropist from Washington, Pennsylvania. Romaine’s mother, Julie’s great-great-grandmother Julia N. Murray, was also of mostly Scots-Irish/Northern Irish heritage. Her father, Magnus Miller Murray, was Mayor of Pittsburgh, from 1828 to 1830, and from 1831 to 1832. Magnus’s father was Commodore Alexander Murray, who served in the Continental Navy, the Continental Army, and later the U.S. Navy, during the American Revolutionary War, the Quasi-War with France, and the First Barbary War in North Africa. Julia’s grandfather, Julie’s other great-great-great-great-grandfather John Wilkins, Jr., was a U.S. Army officer who served as Quartermaster General of the U.S. Army, from 1796 to 1802.