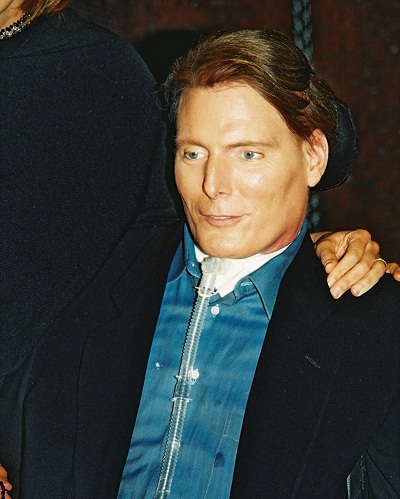 Christopher Reeve was an American actor, writer, director, producer, and activist. He is known for playing Superman in four films starring the character (from 1978 to 1987). Christopher was the son of Barbara Pitney (Lamb), a journalist, and F. D. Reeve (Franklin D’Olier Reeve), a teacher, novelist, poet, and scholar. He was a great-grandson of U.S. Supreme Court Associate Justice Mahlon Pitney. Christopher was married to actress, singer, and activist Dana Reeve, until his death. He had two children with his former partner Gae Exton, and a son with Dana. His nephew by marriage is actor James Morosini.

Christopher was from a prominent family, with many notable ancestors and relatives. Much of Christopher’s ancestry was English, and his family tree includes American-born forebears as far back as the 1600s, including the children of Mayflower passengers. One of Christopher’s paternal great-great-grandfathers, William D’Olier, was from Ireland, and Christopher also had some other Irish, as well as Welsh, Scottish, Scots-Irish/Northern Irish, and German ancestry elsewhere in his background. One of his remote ancestors, in the 1500s, was French.

Christopher’s paternal grandmother was Anne Conrad D’Olier (the daughter of Franklin Woolman D’Olier and Helen Roberts Kitchen). Anne was born in New Jersey. Christopher’s great-grandfather Franklin was a prominent businessperson, and the first national commander of veterans’ organization the American Legion. Franklin was the son of William D’Olier, who was born in Ireland, and of Annie Kay Woolman. Helen was the daughter of Theodore Kitchen, a banker and railroad executive, and of Mary Bingham Roberts.

Christopher’s maternal grandfather was Horace Rand Lamb (the son of Bert Israel Lamb and Harriet “Hattie” Davis). Horace was born in Ohio. Bert was the son of Charles Christian Lamb and Elizabeth Annette Russell/Mann. Harriet was the daughter of Ira Thomas Davis and Eunice Ann Woolsey.

Christopher’s maternal grandmother was Beatrice Louise Pitney (the daughter of Mahlon Pitney and Florence Theodora Shelton). Beatrice was born in Morristown, Morris, New Jersey. Christopher’s great-grandfather Mahlon was an Associate Justice of the Supreme Court of the United States, from March 13, 1912 to December 31, 1922, and, as a member of the Republican Party, was a Member of the U.S. House of Representatives from New Jersey, from March 4, 1895 to January 10, 1899. Mahlon was the son of Henry Cooper Pitney and Sarah Louise/Louisa Halsted. Christopher’s great-grandmother Florence was the daughter of William Henry Shelton and Charlotte Johns Kirtland.

Genealogy of Christopher Reeve (focusing on his mother’s side) – http://www.wikitree.com