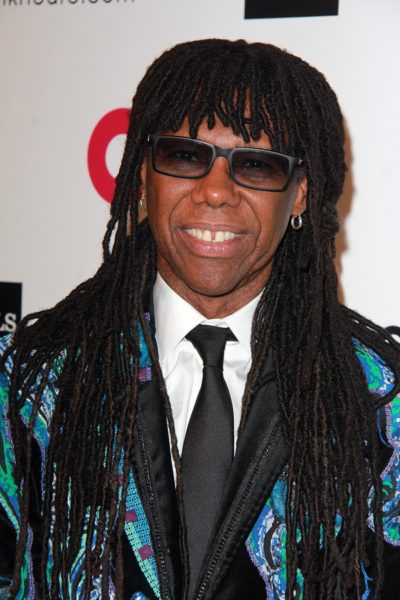 Rodgers in 2015, photo by kathclick/Bigstock.com

Nile Rodgers is an American guitarist, singer, songwriter, record producer, arranger, and composer. He is the lead guitarist of the band Chic, also known as Nile Rodgers & Chic.

He is the son of Beverly Ann and Nile Rodgers.

Nile’s paternal grandfather was Leroy Rodgers (the son of Eugene Rodgers and Pauline Shorter). Leroy was born in Georgia.

Nile’s maternal grandfather was Frederick Lee “Fred” Gooden (later Goodman, the son of Cleveland Gooden, later Goodman, and of Annie Lee Dennard). Frederick was born in Georgia. Cleveland was the son of George Gooden and Canniss. Annie was the daughter of Sandy Dennard and Ida Huoy.

Nile’s maternal grandmother was Alice Clarice “Goodie” Mickens (the daughter of Percy Stanley Mickens and Mabel Ethel Randall). Alice was born in New Jersey. Percy was the son of Abraham Lincoln “Abe” Mickens, who was African-American, and of Alice Watkins/Wicke, who was said to have been an Iroquois Native American; but is listed as born in Virginia, and as being African-American. Nile’s great-grandmother Mabel was the daughter of Lee Randall and Mary Ellen Nicholas. Mary Ellen was the daughter of Dr. Gough, who was a doctor and slave owner, and of Irish descent, and of Caroline, who was black/mixed-race.

Sources: Le Freak: An Upside Down Story of Family, Disco, and Destiny, 2011, by Nile Rodgers