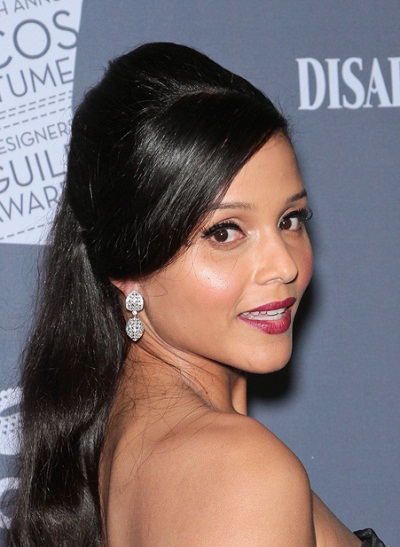 Poitier in 2012, photo by Prphotos

Sydney Tamiia Poitier is an American actress. Her roles include the films Grindhouse/Death Proof, as radio DJ Jungle Julia, and Nine Lives, and the shows Homecoming and Carter. She has also been credited as Sydney Poitier Heartsong, her married name.

Sydney is the daughter of actors Sir Sidney Poitier, who was Bahamian and American, and Joanna Shimkus, who is Canadian. Her father was of African-Bahamian ancestry. Her paternal grandparents owned a farm on Cat Island, and sold produce in Miami. Her father was born there during one such visit. Sydney’s mother is of Lithuanian and Irish heritage.

Sydney is married to Dorian Heartsong, with whom she has a daughter.

Sydney’s paternal grandfather was Reginald James Poitier (the son of March Poitier and Emma Jane “Emily” Evans). Reginald was born on Cat Island. March was the son of David Poitier and Margaret Ambrose. Emma was the daughter of Charles Evans and Jane.

Sydney’s maternal grandfather was named Joseph Shimkus. Joseph was of Lithuanian origin. He was sometimes reported to be Jewish. It is not clear if this is accurate; Sydney’s mother was raised Catholic, and Shimkus is usually a non-Jewish Lithuanian surname.

Sources: Genealogy of Sydney Tamiia Poitier (focusing on her father’s side) – https://www.geni.com