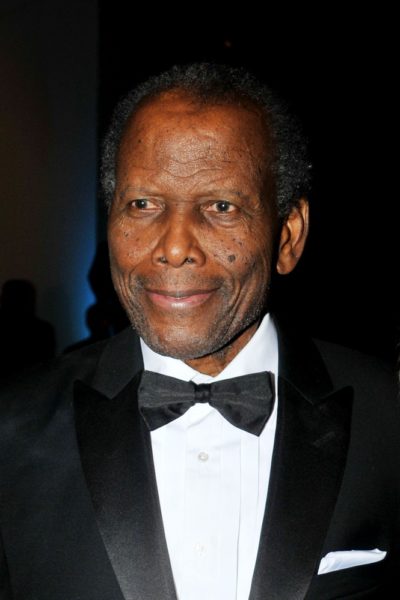 Poitier in 2012, photo by Prphotos

Sir Sidney Poitier was a Bahamian and American actor, film director, activist, and diplomat. He won the Academy Award for Best Actor for Lilies of the Field (1963). His many roles over five decades also included Blackboard Jungle, The Defiant Ones, Porgy and Bess, A Raisin in the Sun, A Patch of Blue, To Sir, with Love, In the Heat of the Night, Guess Who’s Coming to Dinner, Uptown Saturday Night, Shoot to Kill, and Sneakers. He was the Bahamian ambassador to Japan, from 1997 to 2007. He was the first black person to win a lead actor Oscar.

He was born in Miami, Florida, to African-Bahamian parents, Evelyn (Outten/Outen) and Reginald James Poitier, and was raised on Cat Island, in the Bahamas, later moving to Nassau, and then, at fifteen, to Miami and New York in the U.S. His parents owned a farm on the island, and sold produce in Miami. Sidney was born there during one such visit.

Sidney was married to Canadian actress Joanna Shimkus, until his death. He had four children with his former wife Juanita Hardy; and two children, including actress Sydney Tamiia Poitier, with Joanna.

The surname Poitier is considered a Norman name.

Sidney was sometimes said to have had Haitian ancestors on his father’s side. This does not appear to be accurate.