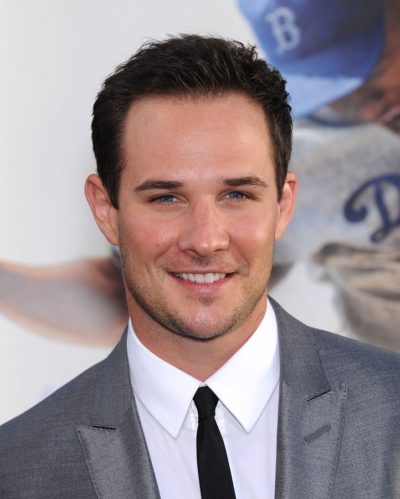 Merriman in 2013, photo by DFree/Bigstock.com

Ryan Merriman is an American actor. He is known for his roles in the films Halloween: Resurrection, Final Destination 3, and 42, among others.

Ryan is the son of Nonalyn and Earl Merriman. He is married to Kristen McMullen.

Ryan’s patrilineal ancestry can be traced to Thomas Merriman, who was born, c. 1571, in Berkshire, England.

Ryan’s paternal grandfather was Earl Eugene Merriman (the son of Hugh Arthur Merriman and Mabel Ruth Swank). Earl was born in Indiana. Hugh was the son of Engerville L. Merriman, who had English ancestry, and of Olive Della Howenstine, who was of German descent. Mabel was also of German ancestry, and was the daughter of Charles Swank and Carrie Mabelle Summers.

Ryan’s maternal grandfather was Guy Tucker Cormack (the son of John Warren Cormack and Winona Angie Tucker). Guy was born in Massachusetts, and had considerable Colonial American (English) ancestry. John was the son of John Soley Cormack, who was born in Grand Falls, New Brunswick, Canada, and of Evelyn Viola Marion Nichols. Winona was the daughter of Ernest Emerson Tucker and Alice May/Mary Shorey.

Sources: Genealogy of Ryan’s father (focusing on his own father’s side) – http://worldconnect.rootsweb.ancestry.com