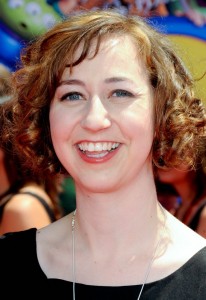 Kristen Schaal is an American actress, comedian, and writer. Her roles include The Last Man on Earth, Bob’s Burgers, BoJack Horseman, The Daily Show, and Bill & Ted Face the Music, among many other works.

She was raised on her family’s cattle ranch near Boulder. Kristen’s father’s family were ethnic Germans, of the Lutheran faith, who lived in Russia for many generations. Kristen’s mother has English, German, and Dutch ancestry. Her surname is pronounced shôl.

Kristen is married to writer and producer Rich Blomquist, with whom she has a daughter.

Kristen’s maternal grandfather was William Newton Hood (the son of Thurman E. Hood and Marie Duwa). William was born in Iowa. Thurman had English ancestry, and was the son of James Siminous Hood and Mary C. Linn. Marie was of German descent, and was the daughter of Joseph Edward Duwa and Edeth M. Freund.

Genealogy of Kristen’s maternal great-great-grandfather, James Siminous Hood (focusing on his own mother’s side) – http://worldconnect.rootsweb.ancestry.com

Genealogy of Kristen’s maternal great-great-grandmother, Edeth M. Freund (focusing on her own father’s side) – http://worldconnect.rootsweb.ancestry.com