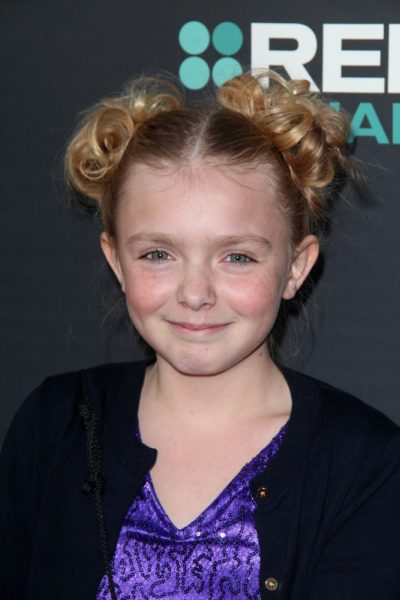 Elsie Fisher is an American actress. She is known for her roles in the films Eighth Grade, Texas Chainsaw Massacre, and My Best Friend’s Exorcism, and on the show Castle Rock.

Elsie is of one half Scandinavian descent.

Elsie’s paternal grandfather was Scott Fjeldstad Fisher (the son of Alfred Thomas Fisher and Ruth F. Fjeldstad). Scott was born in California. Alfred was the son of John Berntsen Fiskearther Fisher, who was Norwegian, and of Theresa Caroline Sophia Tallaksen, who was born in Illinois, to Norwegian parents. Elsie’s great-grandmother Ruth was the daughter of The Rev. Halvor Osmundson Fjeldstad, who was a Lutheran pastor, and of Bertha Marie Johnson. The Rev. Halvor and Bertha were born in Minnesota, both of them to parents of Norwegian origin.

Elsie’s maternal grandfather is James Stanley Rasmussen (the son of Stanley C. Rasmussen and Eva Flavia Wisemiller). James was born in Minnesota. Elsie’s great-grandfather Stanley was the son of Danish parents, John Peter Rasmussen and Pauline Schiermer. Eva was the daughter of Francis Albert Wisemiller, whose father was Swiss-German and whose mother was Canadian, and of Lillian/Lilly May Webster.

Elsie’s maternal grandmother was Anita Belle Hayler (the daughter of George Ashley Hayler and Irene Helland). Anita was born in California. George was the son of Harry/Henry Clarence Hayler, whose parents were English, and of Jessie Laurina/Loreena/Lorene Barnes. Irene was born in North Dakota, the daughter of Gregorius/Rigors Torbjørn Hanson Helland, who was Norwegian, and of Bella Othina Pladsen, whose family was Norwegian.

Genealogy of Elsie Fisher (focusing on her mother’s side) – https://www.geni.com

Genealogy of Elsie’s maternal grandmother, Anita Belle Hayler (focusing on her own father’s side) – https://wc.rootsweb.com