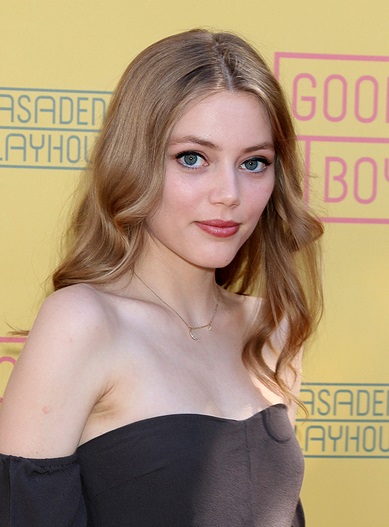 Grace Van Dien is an American actress and streamer. Her roles include the series Greenhouse Academy and The Village and the film Charlie Says. She is the daughter of actors Carrie Mitchum (Caroline Elizabeth Mitchum) and Casper Van Dien, and the great-granddaughter of actors Robert Mitchum and Jack Davis.

Grace’s paternal grandfather was Casper Robert Van Dien (the son of Casper Anson Van Dien and Elizabeth Maria/Mary Bornand). Grace’s grandfather Casper was born in New York. Grace’s great-grandfather Casper was from a family that had lived in the United States since the 1600s. He was the son of Casper Force Van Dien and Alice Wilsie Peterson, and was of mainly Dutch descent, with some English, and remote French, Polish, and Danish, roots. Elizabeth was the daughter of Swiss parents, William Henri Bornand and Emma Augusta Villard, and was of Swiss-French and Swiss-German descent.

Grace’s paternal grandmother was Diane Morrow (the daughter of William Burnell Morrow and Edith Wilhelmina Johnson). William was the son of James William Morrow and Beatrice Flagg, and had English, Irish, and Scottish ancestry. Edith was the daughter of Carl Emil Johnson, who was born in Sweden, and Hannah Omen/Oman, who was born in Finland, and was likely of Swedish descent.

Grace’s maternal grandfather was actor Christopher Mitchum (the son of actors Robert Mitchum and Dorothy Mitchum). Christopher was born in California. Robert was the son of James Thomas Mitchum, who was from Lane, Williamsburg, South Carolina, and of Ann Harriet Henrietta Gunderson, who was Norwegian, born in Kristiania/Christiania, Oslo. Dorothy was born Dorothy Clements Spence, and was the daughter of William Lloyd/Lemuel Spence and Ina Warren Clements.

Grace’s maternal grandmother was actress Cindy Mitchum (born Cynthia Caroline Davis, the daughter of Jack Davis and Dorothy Anne Covert). Cindy was born in California. Jack, a child actor, was born John Howard Davis, and was the son of Howard Burkett/Beckett Davis and Caroyln/Caroline/”Carrie” Want/Worts Boileau. Dorothy was the daughter of Joseph Seamon Covert, who was of part Irish descent, and of Edna Josephine Wand.

Genealogy of Carrie’s paternal grandmother, Diane Morrow (focusing on her own father’s side) – http://worldconnect.rootsweb.ancestry.com