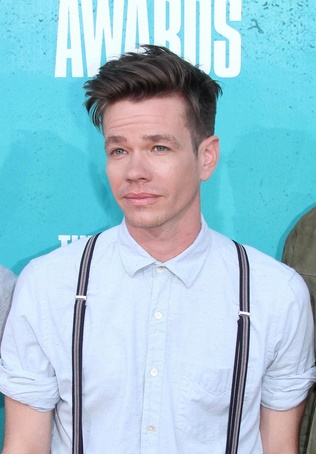 Nate has two children with his partner, British fashion designer Charlotte Ronson. Charlotte is the sister of musicians and DJs Mark Ronson and Samantha Ronson.

Nate’s paternal grandfather is Robert H. Ruess (the son of Albert John Ruess and Margaret Irene Gatens). Robert was born in Iowa. Albert was the son of Henry Roland Ruess, who was born in Iowa, to German parents, and of Wilhelmina M. “Minnie” Brugman, who was of Dutch and German descent. Margaret was of Irish descent, and was the daughter of Edward Gatens and Ellen C. McGee.

Nate’s paternal grandmother was Geraldine Dorothy “Jerry” Wissink (the daughter of Aloysius Wissink and Katharina/Katharine “Kate” Holtermann/Halterman). Geraldine was born in Iowa, to a Dutch father and a German mother. Aloysius was born in Hollands Kroon Municipality, Noord-Holland.

Nate’s maternal grandfather was Anthony William Zinger (the son of Andrew E. Zinger and Estella Marie Moeller). Anthony was born in Iowa, of German descent, with some of his father’s family being from Alsace-Lorraine. Andrew was the son of Anton Zinger and Caroline “Carrie” Kohn. Nate’s great-grandmother Estella was born in Iowa, the daughter of William Adolph Moeller, who was from Schleswig-Holstein, Germany, and of Emma Thiering.