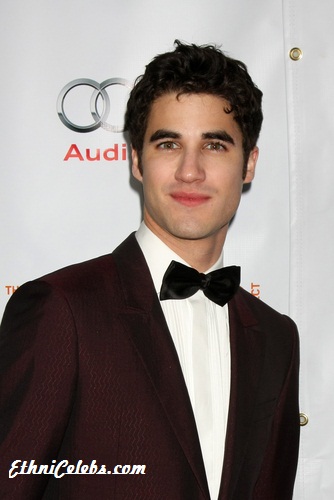 Darren Criss is an American actor, singer, and songwriter. His roles include The Assassination of Gianni Versace: American Crime Story, Superman: Man of Tomorrow, and Midway (2019), as well as many works on stage.

Darren is the son of Cerina and Charles Criss, who started EastWest Bank, serving as its Chairman and CEO. His brother is musician Chuck Criss, of the band Freelance Whales. Darren is married to Mia Swier, with whom he has a daughter.

Darren’s father was American-born, and was of English, German, Northern Irish, and remote Scottish, ancestry. Darren’s mother is Filipino-born, and has Filipino, Spanish, and Chinese ancestry. In an interview on Philstar, Darren stated that he knows basic Visayan rather than Tagalog.

Picture of Darren with his parents can be seen here, and, also with his brother, here.

Darren’s patrilineal ancestry can be traced to Johanne Jorge Nicholas Crist, who was born, c. 1690, in Germany, and to Johanne’s wife, Anna Elizabeth Mueller.

Darren’s paternal grandfather was Charles William Criss (the son of William Ramsey Criss and Olive May White). Charles was born in Pennsylvania. William was the son of Jacob Pitser Criss and Margurete Duran Brown, whose parents were born in Ireland. Olive was the daughter of James Francis White and Nancy Rosetta Cochran.