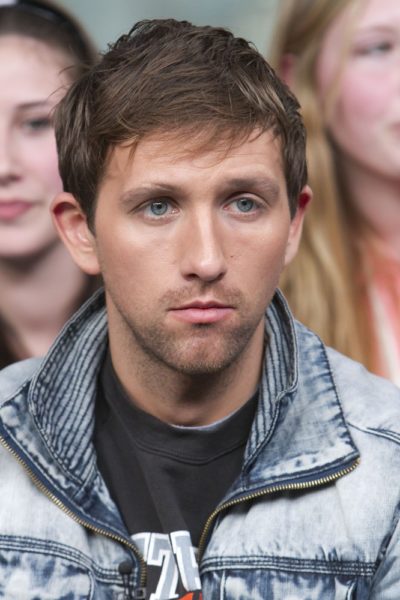 Andrew Dost is an American musician, singer, and multi-instrumentalist. Andrew is a member of rock band Fun., alongside Jack Antonoff and Nate Ruess. He was previously a member of the indie rock band Anathallo.

His father has German, Polish, and French-Canadian (with roots in Brittany) ancestry. His mother is of Hungarian, English, and distant French, descent.

Andrew’s paternal grandmother was Shirley M. Forton (the daughter of Bernard Frank “Bernie” Forton and Sarah Sylvia “Sally” Baker). Bernard was the son of Jerome Louis Forton and Elizabeth DeTour. Sarah was the daughter of Lawrence Baker/Piekarski, who was from either Poland or Germany, and of Magdalene “Maggie” Horkey/Horton/Hooka, who was also from either Poland or Germany.

Andrew’s maternal grandfather was Andrew Kozan (the son of George/Gergely Kozan and Mary/Maria Molenar/Molnar). Andrew’s grandfather Andrew Kozan was born in Markage, Saskatchewan, Canada, to parents from Istensegits, Bukovina, Austria-Hungary, which is now Satu Mare commune, Suceava, or the village of Țibeni, Romania. The family was of Hungarian descent. George was the son of Stephan Kozan and Vera Santo.

Andrew’s maternal grandmother was Lula Mae “LuLu” Ashmore (the daughter of William H. Ashmore and Helen/Hellen Margaret Herrington). Lula was born in Michigan. William was the son of John Ashmore, whose own parents were English, and of Lydia Halstead. Helen was the daughter of Frank George Herrington and Adiah Latheria “Addie” Merritt. Some of Adiah’s roots can be traced back to Michel Merritt/Mariette, who was born, c. 1667, in Montauban, Occitanie, France, and his wife, Esther Trube, who was born, c. 1671, in Saint-Maixent-l’École, Nouvelle Aquitaine, France.