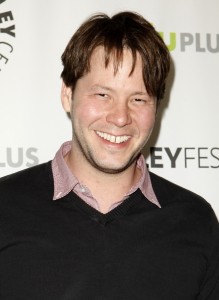 Barinholtz in 2013, photo by PrPhotos

Ike Barinholtz is an American comedian, actor, and screenwriter. His brother is actor and comedian Jon Barinholtz.

Ike’s father was born to a Jewish family (from Russia and Ukraine). Ike’s mother has English, German, French, Scottish, and Welsh ancestry. It is likely that Ike’s mother converted to Judaism. Ike was raised Jewish.

He is married to Erica Hanson, with whom he has three children.

Ike is said to be related to singer and pianist Michael Feinstein, through his paternal grandmother.

Ike’s paternal grandmother is Miriam Feinstein (the daughter of Itzik “Harry” Feinstein and Manya “Mary” Zimbler). Miriam was born in Chicago, to Ukrainian Jewish parents, from Zhytomyr. Manya was the daughter of Edward Zimbler and Kate Tuchinsky.

Genealogy of Ike Barinholtz (focusing on his mother’s side) – http://worldconnect.rootsweb.ancestry.com