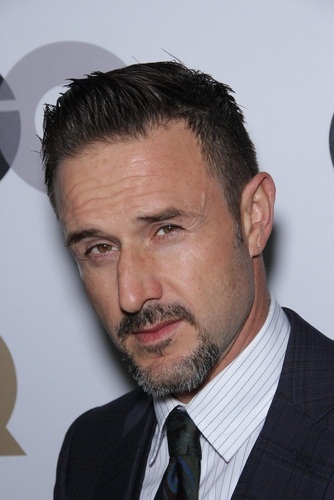 David Arquette is an American actor, professional wrestler, director, producer, screenwriter, and fashion designer. He is known for his roles in the Scream films, as well as Never Been Kissed and Eight Legged Freaks, among many other productions.

David’s family surname was spelled Arcouet many generations back. David’s father, actor Lewis Arquette (Lewis Michael Arquette), had English, French-Canadian, Swiss-German, German, Scottish, Irish, and Welsh ancestry. David’s mother, Brenda Olivia (Nowak), was also involved in the arts, and was Jewish (of Polish Jewish and Russian Jewish descent). As an adult, David had a Bar Mitzvah ceremony by the Western Wall in Israel.

David is the brother of actors Rosanna Arquette, Richmond Arquette, Patricia Arquette, and Alexis Arquette. David is married to entertainment reporter Christina McLarty. He has a daughter with his former wife, actress Courteney Cox; and two children with Christina.

A DNA test whose results were displayed on the show Finding Your Roots with Henry Louis Gates, Jr. (2016) stated that David’s sister Patricia’s genetic ancestry is:

David’s patrilineal line can be traced to Jean Arcouet dit Lajeunesse, who was born, c. 1646, in Marennes, Rochefort, Saintonge, France.

David’s paternal grandfather was Clifford Charles “Cliff” Arquette (the son of Charles Augustus Arquette, Jr. and Winifred/Wynne/Minnie Ethel Clark). Clifford was born in Ohio, and was a famous comedian under the name “Charlie Weaver.” He was known for his appearances on the Hollywood Squares television show, and was also a Civil War expert. David’s great-grandparents Charles and Winifred were in vaudeville. Charles was the son of Charles Arquette (who was born in Michigan, to parents of French-Canadian descent, Peter Daniel Arcouette/Arquette, who was from Sandwich, Ontario, and Marie Anne Valade Viliquette), and of Philomina Josephine “Minnie” Fritsche, who was Swiss, of Swiss-German descent. David’s great-grandmother Winifred was the daughter of Charles Cicero Clark and Emma E. Kear.

David’s paternal grandmother was Mildred Nesbitt LeMay (born Mildred Speight, the daughter of Shirley Sidney Speight and Willie Sue Barr). Mildred was born in Texas, and took on the surname of her stepfather, David John LeMay. Shirley was the son of Jessie Bryan Speight and Ellen Martha Williams. Willie was the daughter of Thomas Alexander Barr and Mary Emma Hill.

David’s maternal grandfather was Yusseff “Joseph” Nowack/Nowak (the son of Wolff “Zev” Nowak and a mother whose maiden name was Yasnor). Yusseff was a Jewish emigrant, who was born in Belaja Zerkovy/Bila Tserkva, Kiev, Ukraine, then in the Russian Empire.

David’s maternal grandmother was Claire Hibel/Hibbel (the daughter of Harry Hibel and Fannie Zacharek). Claire was born in New York, to Russian Jewish parents. Harry was the son of Louis Hibel and Jennie Ita Osterer, who was born in Przasnysz, Poland. Fannie was the daughter of Moshe Zacharek and Rochel Fannie Schnitzler/Znizer.

Genealogy of David Arquette (through his sister, Alexis Arquette) (focusing on his father’s side) – http://www.findagrave.com