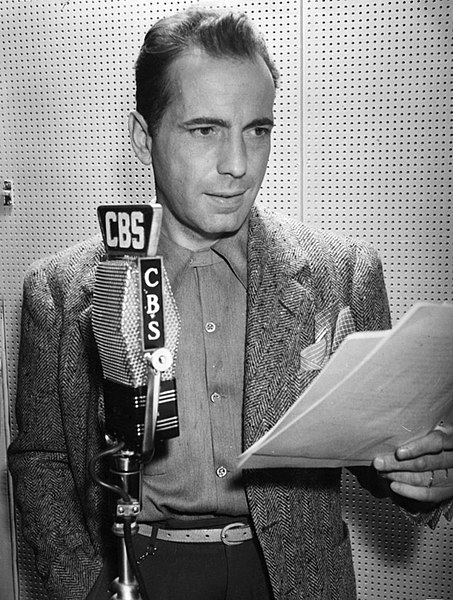 Humphrey Bogart was an American actor. He won the Academy Award for Best Actor for The African Queen (1951). He also starred in The Petrified Forest, The Maltese Falcon, Casablanca, The Big Sleep, and Key Largo, among many other films.

He was the son of Maud (Humphrey) and Belmont DeForest Bogart. His father was a surgeon. His mother was a commercial illustrator, water colorist, and suffragette. He was of Colonial American descent, with largely English and Dutch roots, and deep family lines in New England and New York. Humphrey was married to actress Lauren Bacall, until his death. The couple had two children, including writer and producer Stephen Humphrey Bogart.

Humphrey’s patrilineal line can be traced to Theunis Gijsbertszn in den Boogaertman, who was born, c. 1562, in Schoonrewoerd, Leerdam, Netherlands, and to his wife, Neeltjien Laurens, who was also born in Schoonrewoerd.

Humphrey’s paternal grandfather was Adam Welty Bogart (the son of Peter Brokaw Bogart and Agnes Welty). Adam was born in Owasco, Cayuga, New York. Peter was the son of Jacob Bogaert/Bogart and Mary Brokaw. Agnes was the daughter of Adam Welty.

Humphrey’s maternal grandmother was Frances Dewey Churchill (the daughter of Henry L. Churchill and Sarah Dewey). Frances was born in Stockbridge, Berkshire, Massachusetts. Henry was the son of Samuel Churchill III and Phoebe/Phebe Seward. Sarah was the daughter of Asahel/Ashel Dewey and Anna Curtis.

Genealogy of Humphrey Bogart (focusing on his father’s side) – http://www.findagrave.com