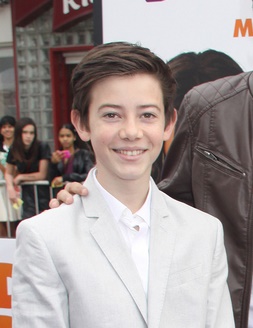 Griffin Gluck is an American actor. He has starred in the films Middle School: The Worst Years of My Life (2016) and Big Time Adolescence (2019), among others.

He is the son of Karin Beck, a line producer and production assistant, and Cellin Gluck, a director and producer. Griffin’s father was born in Wakayama Prefecture, Japan, to American-born parents, and was raised partly in Kobe, Japan; Griffin’s paternal grandmother was of Japanese origin, and Griffin’s paternal grandfather, who was raised Jewish, was of Ashkenazi Jewish and British Isles [English, Scottish] descent. Griffin’s mother has German, English, Scottish, Irish, and Polish ancestry.

A picture of Griffin with his father can be seen here.

Griffin has said that his Japanese name is Gumanchu.

Griffin’s paternal grandmother was Sumiye/Sumi Hiramoto (the daughter of Jitsuro Hiramoto and Takayo Tamura). Sumi was a Nisei (second-generation Japanese). She was born in California, to Japanese parents. Griffin’s grandmother was interned at the Rohwer War Relocation Center during World War II, because of her Japanese ancestry. Griffin’s great-grandfather Jitsuro was the son of Risuke Hiramoto and Hamayo Oda.

Griffin’s maternal grandmother is Patricia Wynne Cummings (the daughter of John Patrick Cummings and Blanche Constance Krywicki). Patricia was born in New York. John was the son of Thomas Joseph Cummings, whose parents were Irish, and of Mary E. Wynne, who was born in Scotland, to Irish parents. Blanche was born in Pennsylvania, to Polish parents, Maike/Michael Krzwicki/Krywicki and Mary M. Woscavits.

Sources: Interview with Griffin’s father about his Jewish and Japanese background – http://www.accessatlanta.com

Genealogy of Griffin Gluck (focusing on his father’s side) – http://www.geni.com