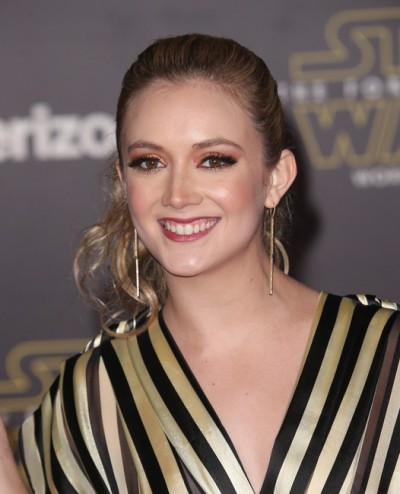 Lourd in 2015, photo by www.prphotos.com

Billie Lourd is an American actress. She is known for playing Chanel #3 on the series Scream Queens, as well as for her roles in the films Billionaire Boys Club, Booksmart, and Star Wars.

She is the daughter of actress and author Carrie Fisher and talent agent Bryan Lourd, and the granddaughter of singer and actor Eddie Fisher and singer, actress, and humanitarian Debbie Reynolds. Her uncle is TV and film maker Todd Fisher, and her aunts are actresses Joely Fisher and Tricia Leigh Fisher. Billie is married to actor Austen Rydell, with whom she has two children. Austen is the grandson of actor, director, and producer Mark Rydell and actress Joanne Linville.

Billie’s mother had described herself as having been raised Protestant. As an adult, Billie’s mother and Billie attended Jewish services with friends.

Billie’s paternal grandmother is Sherion Brice (the daughter of Clyde Brown/Bud Brice and Margie Helen Day). Clyde was the son of James Ira Milton Brice and Rena Easterling. Margie was the daughter of Thomas C. Day and Frankie Dee Azbell.

Billie’s maternal grandfather was Eddie Fisher (the son of Joseph D. Tisch/Fisher and Gitte Kathrine “Kate” Minicker/Minocker/Winokur). Eddie was born in Pennsylvania, to Jewish emigrant parents. Joseph was born in Russia, and was the son of either Mojsche/Morris Tisch/Fisher and Sarah Peltzer, or of Nathan Tisch and Linne. Gitte was born in Yampil’ Vinnyts’ka, Ukraine, the daughter of Zelig/Selig Zadik Minicker/Minniker/Winokur and Neche “Ida” Hudel.

Genealogy of Billie’s paternal great-grandmother, Margie Helen Day (focusing on her own father’s side) – http://worldconnect.rootsweb.ancestry.com

Genealogy of Billie Lourd (focusing on her mother’s side) – https://www.wikitree.com

Genealogy of Billie’s mother (focusing on her own mother’s side) – http://worldconnect.rootsweb.ancestry.com

Genealogy of Billie’s maternal grandmother, Debbie Reynolds (focusing on her own father’s side) – http://worldconnect.rootsweb.ancestry.com