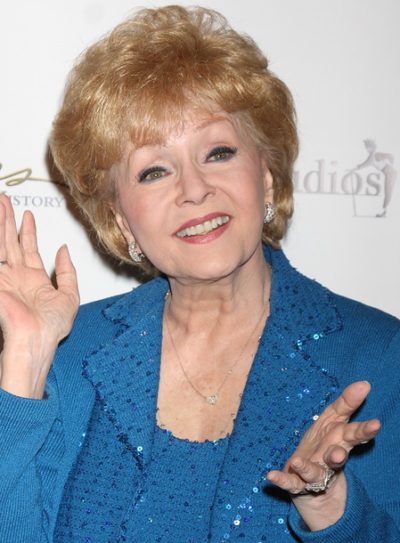 Reynolds in 2014, photo by kathclick/Bigstock.com

Debbie was the daughter of Maxine/Maxene N. (Harman/Harmon) and Raymond Francis Reynolds. With her former husband, singer and actor Eddie Fisher, she was the mother of actress and writer Carrie Fisher and filmmaker Todd Fisher, and the grandmother of actress Billie Lourd.

Debbie was raised a Nazarene. She was of English, small amounts of Scottish, Scots-Irish/Northern Irish, and German, and distant French, ancestry.

Debbie’s paternal grandmother was Pearl Ruby Prigmore (the daughter of Joseph Martin/Monroe Prigmore and Nancy Elizabeth Vestal/Vestel). Pearl was born in Texas. Joseph was the son of Thomas Prigmore and Rachel Jennings. Nancy was the daughter of John Thomas Vestal and Miriam/Mariam Catherine Tate.

Debbie’s maternal grandmother was Maxie Boone Dykeman (the daughter of William Tennessee Dykeman and Mary Adeline Rollins). Maxie was born in Missouri. William was the son of Samuel Henry Dykeman and Phebe/Phoebe Ann Wren. Mary was the daughter of Nester Boone Rollins and Julia Ann Elliott.

Genealogy of Debbie Reynolds (focusing on her father’s side) – http://worldconnect.rootsweb.ancestry.com