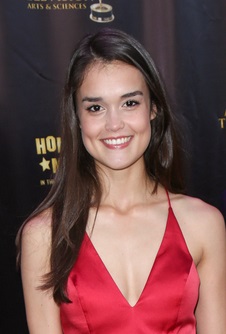 True O’Brien is an American model and actress.

She is the daughter of Elizbaeth and John O’Brien, a graphic designer. True is a first cousin of actress and singer Hailee Steinfeld.

True’s great-uncle, the brother of her maternal grandfather, is child actor Larry Domasin. Larry is pictured here and here.

True’s paternal grandfather was Ralph Rockwell O’Brien (the son of Cornelius E. O’Brien and Eva L. Rockwell). Ralph was born in Colorado. Cornelius was the son of Addison McClelland O’Brien, who was of Cornish, Dutch, English, and Irish descent, and of Eleonora Margaret “Nora” Gehin, who was of French descent. True’s great-grandmother Eva was of English and Scottish descent, and likely was the daughter of Leroy Elwood Rockwell, and of an unknown mother from New York.

True’s paternal grandmother is Lucille Resel (the daughter of Konrad Resel and Jennie/Johanna Praschnikar). Lucille was born in Colorado. Konrad was from Lankowitz, Austria. Jennie was born in Loben, Carinthia, Austria, and had Slovenian ancestry.

Ricardo’s mother, Evelyn Olivia Bain, was born in 1910 in Los Angeles; Evelyn was True’s great-grandmother. Evelyn was African-American, and she and her parents, Thomas Edward Bain (born in Kansas, to Gabrel Bain and Isabella/Belle Johnson) and Wilma Frances “Willie” Peterson (born in Arkansas, to William F. Peterson and Nannie Hall), are listed as either African-American or, sometimes, as “Mulatto,” in census records. A picture of Evelyn can be seen here.

True’s maternal grandmother was Laurita Lee Hinkle (the daughter of William Hicks Hinkle and Edith Laurita Jones). Laurita was born in Texas, and had English, German, Scots-Irish/Northern Irish, and Scottish, ancestry. William was the son of Joshua Madison Hinkle and Ella Malona Payne. Edith was the daughter of Charles Kirby Jones and Ethel Effie Smith.

True’s matrilineal ancestry can be traced back to her fourth great-grandmother, Penelope “Phenina” Watson.