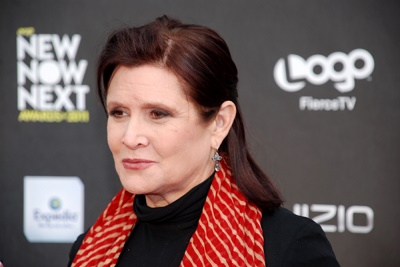 Carrie Fisher was an American actress, novelist, screenwriter, humorist, producer, and speaker. She is known for starring in Star Wars, and for her roles in The Blues Brothers and When Harry Met Sally…, among other films. She also wrote a hit book and stage show.

She was the daughter of singers and actors Eddie Fisher and Debbie Reynolds (born Mary Frances Reynolds). Her brother is TV and filmmaker Todd Fisher, and her half-siblings are actresses Joely Fisher and Tricia Leigh Fisher. Carrie’s daughter, with agent Bryan Lourd, is actress Billie Lourd.

Carrie had described herself as having been raised Protestant. As an adult, she and her daughter attended Jewish services with friends.

Genealogy of Carrie Fisher (focusing on her mother’s side) – http://worldconnect.rootsweb.ancestry.com

Genealogy of Carrie’s mother (focusing on her own father’s side) – http://worldconnect.rootsweb.ancestry.com