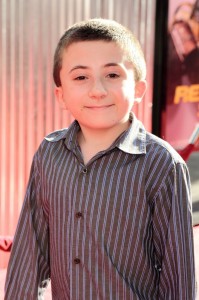 Shaffer in 2011, photo by Prphotos

Atticus Shaffer is an American actor.

Atticus is the son of Ron and Debbie Shaffer.

He has type four osteogenesis imperfecta, which causes fragile bones and short stature.

Atticus’ paternal grandfather is Roy Edward Shaffer, Sr. (the son of William Albert Shaffer and Helen Dorothy Pearson). Roy was born in Indiana, and has German and English ancestry. William was the son of William W. Shaffer and Lucy Cornelia Albright. Helen was the daughter of Thomas Allen Pearson and Katherine B. Tryon.

Atticus’ maternal grandfather is Kenneth Robert Solgot/Salgat (the son of Henry Solgot and May Cotterel). Kenneth was born in Michigan, and had Swiss-French (from the Solgot surname), German, French (including French-Canadian), and English, ancestry.

Another genealogy of Atticus Shaffer (focusing on his mother’s side) – http://familytreemaker.genealogy.com