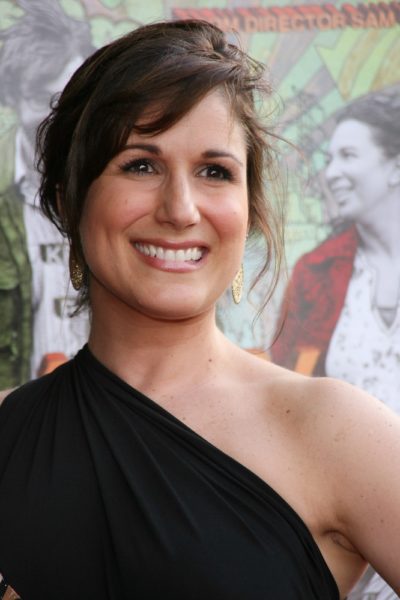 Stephanie J. Block is an American actress and singer.

Stephanie is the daughter of Rosemarie, who worked for the local school district, and Steven Block, a welfare fraud investigator. Her mother was of half Italian and half Polish descent. Her father is of German descent on one side, and of Frisian, French-Canadian, Scottish, Irish, and English descent on the other. Stephanie was raised a Catholic.

She is married to actor Sebastian Arcelus, with whom she has a daughter.

Stephanie’s paternal grandfather was Louis/Lewis James Block (the son of Albert Block and Louise Backus). Louis was born in South Dakota. Albert was born in Missouri, to German parents. Louise was German.

Stephanie’s paternal grandmother was Audrey Marguerite Fields (the daughter of Moses Alexander Fields and Hilka Cecelia/Cecilia Van Gerpen). Stephanie’s great-grandfather Moses was the son of Frederick/Fredrick William Fields and Margaret/Marguerite Almina Bressord/Brossour/Brossor. Frederick’s mother was born in Québec, Canada, possibly of Irish descent, and his father was born in either Canada or Scotland, and likely was of part English ancestry. Marguerite was born in Burlington, Vermont, to a Canadian mother, and to a father who was born in either Vermont or Canada, of French-Canadian descent. Stephanie’s great-grandmother Hilka was the daughter of Franz Cornelius Van Gerpen, who was Frisian, from Ostfriesland, Germany, and of Christina Dreszen/Driesen, who was born in Iowa, to parents from Germany; it is not clear if she was also of Frisian ancestry.

Stephanie’s maternal grandfather was Norman D. Garritano (the son of Antonio Garritano and Rose/Rosa Fuoco Ross). Norman was born in Indiana. Antonio was from Longobardi, Calabria, and was the son of Domminick Garritano and Luisa. Rose was born in Ohio, to Italian parents, Frank and Gelsomina.

Stephanie’s maternal grandmother was Irene Gajewski (the daughter of Marcin/Martin Gajewski and Cecylia/Cecilia Smurzynska). Irene was born in Indiana, to Polish parents. Marcin was from Lublin.

Sources: Genealogy of Stephanie J. Block (focusing on her father’s side) – http://wc.rootsweb.ancestry.com