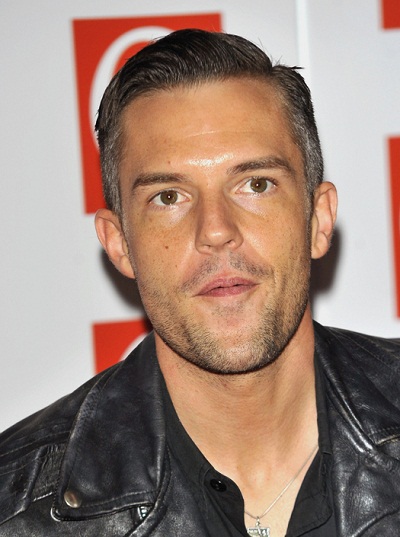 Flowers in 2012, photo by PrPhotos

Brandon Flowers is an American musician, singer, songwriter, and philanthropist. He is the lead vocalist of the Las Vegas-based rock band The Killers. He grew up partly in Payson and Nephi, Utah. Brandon was raised a Mormon (Latter Day Saint).

His cousin is professional golfer Craig Barlow. Brandon is married to Tana Mundkowsky, with whom he has three children.

Brandon’s paternal grandfather was Ottis/Otis Newell Flowers (the son of Lacey Austin Flowers and Maggie Hires). Ottis was born in Georgia. Lacey was the son of Thomas James Flowers and Martha Jane Rodgers. Maggie was the daughter of Mitchell Hires and Josephine Ionia Wade.

Brandon’s paternal grandmother was Adeline Martha Zumovitch (the daughter of William Zumovitch/Vincentas/Zimavičius and Mary/Marija Valant/Valient/Valentinavičiūtė). Adeline was born in Pennsylvania, to Lithuanian parents. William was the son of Joseph/Juozapas Zumovitch/Zimavičius.

Brandon’s maternal grandfather was Richard Arthur Barlow (the son of Arthur Woodsbury Barlow and Malinda Sylvestra/Sylvesta Dixie Hall). Richard was born in Utah. Brandon’s great-grandfather Arthur was the son of Herbert Arthur Barlow, whose parents were English, and of Clara Elizabeth Woodbury, whose mother was of Manx descent. Malinda was the daughter of William Edward Hall and Cora Alice Barr.

Brandon’s maternal grandmother was Suzanne Yvonne Longaker (the daughter of Ernest Clifton Longaker and Rose Clemenceau/Clem Kiene). Suzanne was born in Kansas. Ernest was the son of Isaac Newton Longaker and Mary Jane/Ann Sellers, whose mother likely was of Welsh descent. Rose was the daughter of Francis Anthony Kiene, who was an ethnic German, born in Strasbourg, Bas-Rhin, Alsace, France, and of Rose Susan Doriot, who was French.

Through his great-great-great-grandfather Orin Woodbury, Brandon is a third cousin, once removed, of violinist and singer Lindsey Stirling.

Sources: Genealogies of Brandon Flowers (focusing on his mother’s side) – http://www.geni.com
http://wc.rootsweb.ancestry.com