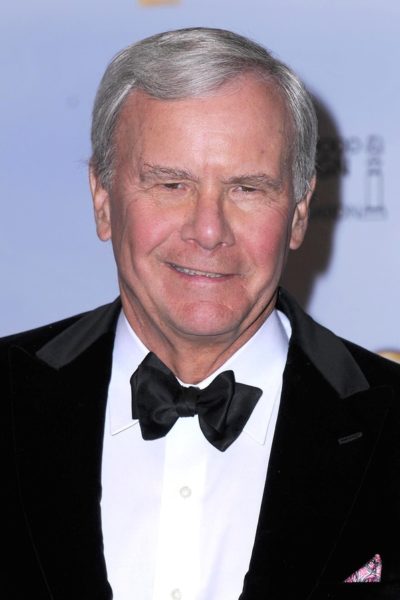 Brokaw in 2009, photo by s_bukley/Bigstock.com

Tom Brokaw is an American television journalist and author. He was the anchor and managing editor of NBC Nightly News from 1982 to 2004.

Tom is the son of Eugenia “Jean” (Conley) and Anthony Orville “Red” Brokaw.

Tom’s paternal grandfather was William Loren Brokaw (the son of Richard Patterson Brokaw and Anna M./E. Hyde). William was born in South Dakota. Richard was the son of Joseph Brokaw and Sarah Patterson. Anna was the daughter of Elias Hyde and Sarah Bethiah/Berthia Woodward.

According to Tom’s official website, he has French Huguenot ancestry through his Brokaw line, originally Broucard. His ancestor, John Broucard, was born, c. 1680, in New York, to Bourgon Broucard and Catherine Lefevre, who were French Huguenots. John’s wife, Sarah Teunis (van Middleswart), was born in New Jersey, to Dutch parents.

Tom’s paternal grandmother was Elisabeth/Elizabeth “Lizzie” Meuer/Meier. Elisabeth was born in Wisconsin. Her father was born “at sea”, likely of German descent, and her mother was German.

Tom’s maternal grandfather was James Henry Conley (the son of Thomas Conley and Matilda Moser). James was born in Manitoba, Canada. Thomas was born in Wisconsin, to Irish parents. Matilda was born in Minnesota, to Swiss parents, Henry Moser and Anna.

Tom’s maternal grandmother was Lalla Ethel Baker (the daughter of Eugene Baker and Addie Bradford Sperry). Lalla was born in Minnesota. Eugene was the son of Nathan M. Baker and Elmina. Addie was the daughter of Charles B. Sperry and Mary E.