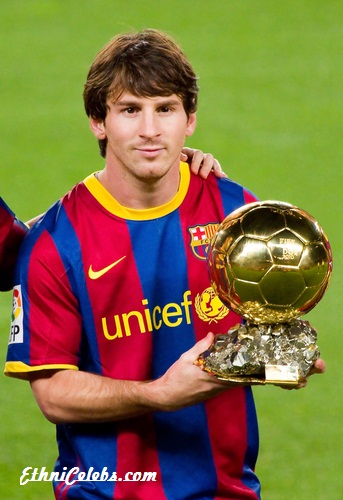 Messi in 2011, photo by Natursports / Shutterstock.com

Lionel Messi is an Argentinian professional footballer, considered one of the best players of the sport. He plays as a forward for Ligue 1 club Paris Saint-Germain and captains the Argentina national team. He is also known as Leo Messi.

Lionel is the son of Celia María Cuccittini and Jorge Horacio Messi Pérez, a steel factory manager. His cousins are professional footballers Maxi Biancucchi and Emanuel Biancucchi. He is married to Antonella Roccuzzo, with whom he has three children. Pictures of Lionel’s grandparents and relatives can be seen here and here.

Lionel’s paternal grandfather was named Eusebio Italo Messi Baró (the son of Aniceto Messi). Aniceto was the son of Italian parents, Angelo Messi and Maria Latini, who were from Recanati, Province of Macerata, Marche. Angelo was the son of Pacifico Messi and Lucia Catena. Maria was the daughter of Raffaele Latini and Rosa Donati. The couple married c. 1890 and moved to Rosario, Argentina c. 1893.