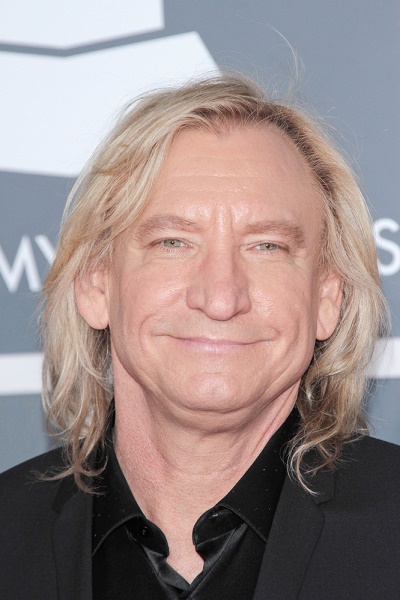 Joe Walsh is an American singer, songwriter, multi-instrumentalist, composer, and record producer. He is a member of the band Eagles. Other members of the group include/have included Don Felder, Glenn Frey, Don Henley, Bernie Leadon, and Randy Meisner.

Joe’s biological father, Robert Newton Fidler, was killed in a plane crash. Joe was subsequently adopted by his stepfather, at the age of five. His mother, Helen Alice (Bowen), is said to have German and Scottish ancestry. Joe is married to Marjorie Bach, who is the sister of actress and model Barbara Bach.

Joe’s paternal grandfather was Alden Anderson Fidler (the son of Walter Hart Fidler and Mattie Anderson). Alden was born in Kansas. Walter was the son of John Fidler/Fiddler, who was from Lancashire, England, and of Mary Elizabeth Hart, whose parents were from Hammelburg, Bavaria, Germany, and Dürrenäsch, Canton of Aargau, Switzerland, respectively. Joe’s great-grandmother Mattie was the daughter of William Gordon Anderson and Hulda Martha Lucus.

Joe’s maternal grandfather was Floyd Palmer Bowen (the son of Adelbert Bowen and Cora A. Losey). Adelbert was the son of David Bowen and Esther Palmer. Cora was the daughter of George Henry Losey and Mary Alice Saunders.

Joe’s maternal grandmother was Harriet K. Clark (the daughter of Joseph M. Clark and Sallie Thompson). Sallie was the daughter of William Thompson and Sarah Catherine Morgan, whose mother was born in County Donegal, Ireland.

Genealogy of Joe Walsh (focusing on his father’s side) – http://gw.geneanet.org