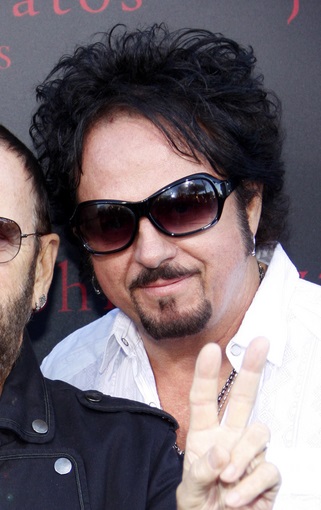 Lukather in 2014, photo by Prphotos

Steve is the son of Kathleen (Johnson) and William Lukather. Steve’s father is three quarters Ashkenazi Jewish and one quarter Sephardi Jewish descent. Steve’s mother is of approximately three eighths Irish, one quarter Swedish, one quarter English, and one eighth Scottish, ancestry.

Steve’s paternal grandmother was Phyllis/Phyliss Pinto (the daughter of Samuel Pinto and Pauline “Polly” Rose). Phyllis was born in Massachusetts. Samuel was a Sephardi Jew, who was born in Spain, the son of Jacob and Mary, with his own father having been born in Morocco. Pauline was born in New York, to Jewish parents, Samuel and Dora. Her parents’ birthplaces are listed as “Austria” on the 1910 U.S. Census and as “Germany” on the 1920 U.S. Census.

Steve’s maternal grandfather was William Elof Johnson (the son of Elof/Elaf H. Johnson and Bessie P. Dolan). William was born in New York, to a Swedish father and an Irish mother.

Genealogy of Steve Lukather (focusing on his father’s side) – https://www.geni.com